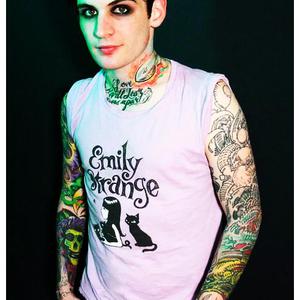 William Control is an electronic music project based in Seattle, WA and formed as a side project by Aiden's William Francis in 2008. He was signed to Victory and released two albums, Hate Culture and Noir, and an EP, Novus Ordo Seclorum, through the label. He released his third album, Silentium Amoris, through his own Control Records on April 2, 2012. William has also written a book of poems, essays, and prose, titled Prose & Poems, which he released on his official web-store.

William Francis created William Control because he was interested in making music that didn't match the style of his band Aiden. In 2008 William Control released its debut album Hate Culture which is, as explained in a Kerrang! magazine interview, the story of a man named William Control and his last night on Earth because he wishes to kill himself. Hate Culture peaked at No. 12 on the Billboard Electronic Albums chart and No. 43 on the Heatseekers chart. Its only single was "Beautiful Loser," for which a music video was made.

William Control toured with Escape the Fate on their This War Is Ours tour in late 2008. In 2009, William began working on Noir, which was released June 8, 2010. He invited his friends and fans to come up to the studio and record vocals on it, including Ashley Costello of Orange County rock band New Years Day and Jeffree Star. He then supported Jeffree Star on tour and headlined a show the day after.

In April and May 2012 William performed on the Fight to Unite Tour with Brokencyde and Blood On The Dance Floor, and in June he headlined the New Faith Tour in Europe, playing shows in the UK, Netherlands, and France. William will be performing in London at O2 Academy Islington on August 29, 2012, and it will be filmed for a DVD release.