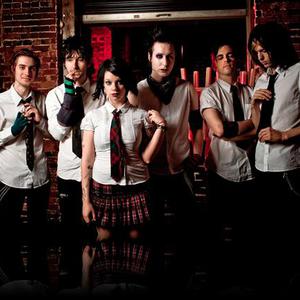 The Birthday Massacre is a synth rock band, based in Toronto, Ontario, Canada. The band was officially formed in 1999, known at that time as Imagica. The band consists of Chibi (vocals), Rainbow (guitars and programming), Michael Falcore (guitars), Owen (keyboards), Nate Manor (bass), and Rhim (drums). Their sound is mostly a fusion of retro electronica and dynamic contemporary songwriting. Elements of children's fiction and adult fantasy are combined with twisting distortion and euphoric melody to create a unique and original sound dubbed "post-retro".

Their sound is mostly a fusion of retro electronica and dynamic contemporary songwriting. Elements of children's fiction and adult fantasy are combined with twisting distortion and euphoric melody to create a unique and original sound dubbed "post-retro". This sound is also affiliated with "synth rock" a rising genre influenced by elements 80's synthpop, industrial, and gothic rock.

In 2001, Dank left the group, and the others relocated from London to Toronto, Ontario, to begin recording. There, they recorded another limited edition demo, this time with five songs.

In 2005 the band signed to Metropolis Records and released "Violet" in the United States, Canada, United Kingdom, and most of South America. Owen joined on live keyboards and in August, the band began a series of international tours taking them to Switzerland, Germany, the Netherlands, Hungary, the Czech Republic, and Belgium. Also in August, a DVD consisting of a video for the song "Blue" was released. It also included behind-the-scenes footage, interviews, a studio performance of "Nevermind" as well as live performances of "Violet" and "Video Kid". The centerpiece of the DVD was the Dan Ouellette-directed video for "Blue".

In early 2006, the Birthday Massacre toured North America, playing across Canada, the United States, and Mexico on their "Broken Minds" tour. They also played Europe in the summer of 2006.

In June 2007, it was announced that the band was working on a new record with Canadian producer/engineer Dave "Rave" Ogilvie (producer of many industrial acts such as Skinny Puppy, not to be confused with Kevin Ogilvie, frontman of Skinny Puppy) and that bass player Aslan had left the band for his own project named Aslan Osiris. Aslan was replaced on bass by former drummer O.E . The demo version of the first single, "Kill the Lights", was released on Vampirefreaks and MySpace for streaming on January 1, 2007. "Looking Glass" (another single from "Walking With Strangers") was released for streaming on August 1, 2007 for Vampirefreaks and MySpace.


On September 11th, 2007 the band released "Walking With Strangers" in North America, entering at #10 on the Billboard "Top Heatseekers" chart for September 29th. The album was released in Europe on September 21 and in the UK on October 22.

On August 9, 2011 the band released the Imaginary Monsters EP.