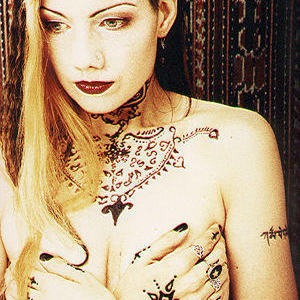 Rhea's Obsession consists of a pair of musicians each who brought in an entirely different musical background. Sue Hutton brings in experience with Indo-Celtic-Bulgarian style vocals, and a variety of percussion. Jim Field, on the other hand, has spent his time working on experimental and hard core music. And the combination, though unusual, works well. The two reflected upon their differences when naming the group, choosing the Greek goddess Rhea - the daughter of the gods representing Earth and Sky.

In 1995, the two first worked together, doing the soundtrack to an experimental dance film called Tabulae Anatomacae Sex. Canada's Much Music/Bravo TV, which purchased the movie for broadcast, chose the group to score music for the network. This success led the pair to choose to record an album. In 1996, that album, Initiation, was released, and two tracks were licensed for inclusion in USA Network's series La Femme Nikita.

The album received enough attention that they were picked up by Metropolis Records, where their second album, Between Earth and Sky was released in 2000. There was also enough interest in the group at this time that Metropolis took their first album, added bonus tracks, and re-issued it as Re: Initiation.

The score of the Canadian TV-Series ReGenesis (2004-2007) featured some of Rhea's Obsession's songs.

Between Earth And Sky