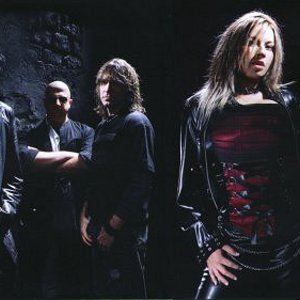 ?Hydrogyn is going to be big, very big...? ? Michael Wagener, Producer (Ozzy Osbourne, Skid Row, Alice Cooper) IN THE BEGINNING? In September 2003, West Virginia guitarists Jeff Boggs and Jeff Westlake began work on a new experiment ? a compelling modern heavy rock tour de force like no other on the scene ? an outfit designed to destroy musical and industry barriers. Jeff Westlake on the blueprints behind HYDROGYN, ?We wanted something a broad audience could love but also be something special. Something that stood out."

In September 2003, West Virginia guitarists Jeff Boggs and Jeff Westlake began work on a new experiment ? a compelling modern heavy rock tour de force like no other on the scene ? an outfit designed to destroy musical and industry barriers.

Jeff Westlake on the blueprints behind HYDROGYN, ?We wanted something a broad audience could love but also be something special. Something that stood out."

Fortified with cutting edge riffs, intelligent lyrics and massive hooks delivered by Julie (just ?Julie?), a stunning front lady with a multi-octave range, the result is a formula set to conquer everything from Alternative Rock to Modern Hard Rock to Timeless Metal without sacrificing credibility.

HYDROGYN is built to explode.

By the time the band's self-produced debut hit the scene, the industry was already putting their ears to the ground, picking up on the rumble that is HYDROGYN. Best Served With Volume found the band in favor with soft drink giant Pepsi, who not only sponsored the fledgling outfit but hoisted them in front of tens of thousands strong at NASCAR (Chevy Rocking 400 May 2005). The audience response was nothing short of inspiring. It was clear, even without prior exposure to the band, onlookers fell into the hands of the fivesome's massive, genre leaping sound and mesmerizing front lady, making the case that Jeff Boggs, Jeff Westlake, Julie, bassist Jason Fields and drummer Jerry Lawson were onto something.

The audience affect was verified when HYDROGYN began packing clubs in the Midwest and New England areas, selling out venues that seated up to 1500 people. Smaller venues had them booked for multiple nights. HYDROGYN was rapidly becoming a live band to be reckoned with.

?In 7 years of editing a major hard rock webzine, I have never seen an indie act with such a complete package ? broad appeal, great musicianship, a dynamic front lady and most important, they are smart AND determined. They understand the big picture and are quickly becoming part of it. ? ? Brian Coles, Editor - Electricbasement.com

Hot off the heals of Volume's release, HYDROGYN issued a professional video clip for the single ?The Sand,? which was featured at the world renowned Electricbasement.com. The response to the bombastic music and sensual video was immediate, yielding the band radio guest spots across the country including www.Dailynoise.com and several Clear Channel stations including WAMX 106.3. Dark Vission TV jumped to put it in rotation, providing the band with massive exposure in Mexico and Latin America. Traffic to the band's website soared, with visits eclipsing 25,000 per month, an astounding total for a new, unsigned band.

But it did not stop there. NOW Comics featured a HYDROGYN track, ?Vesper's Song?, as a CD single included with their acclaimed graphic novel release VESPERS? by veteran author/illustrator Tony Caputo. The novel and band are currently nominated for an IPPY Award, which is a top honor in the independent publishing industry. Caputo also assisted in making the band's new, curvaceous logo, perfect for hot selling T-shirts and other merchandise. Taking advantage of this, the band signed a licensing deal with Crave Trendware, with custom HYDROGYN watches to see store shelves in early 2006.

Julie's visual and vocal appeal helped her gain notoriety with her very own column at Electricbasement.com called Julie's Jolts, where visitors voted on which pics to include in her forthcoming calendar. The idea was a no-brainer after the brisk internet sales of Volume as well as a Julie poster that sold out a mere weeks after being posted in the band's online store. The band's ability to sell merchandise was another strong asset.

In the Spring of 2005 the band received yet another jaw dropping accolade. Legendary producer Michael Wagener (Ozzy Osbourne, Skid Row, Alice Cooper) heard the band and was impressed to say the least, deeming them the best band he has heard in years. He also understood something else ? the band could go over not just in North America, but also in Asia, Europe and South America. Once again, an indicator for the bands potential to cross borders, not just in genre, but geographical as well. So optimistic about their prospects, he agreed to produce the band's next record.

After leaving the studio In August, the band headlined the second stage at the popular Xfest in West Virginia, put on by Clear Channel station WAMX. Other bands on the bill include the Gold selling Seether. Regional Clear Channel General Manager Judy Jennings has backed the band by putting them in rotation on WAMX (106.3) and WKEE (100.5). Jennings is notable for helping to discover Billy Ray Cyrus and recent major label sign American Minor.

As of this writing, HYDROGYN's first major CD, Bombshell, made its official release on October 31st of 2006 through the bands own DA RECORDS. The CD hit Billboard charts in 3 different areas in November of 2006. Right on the heels of that Success the band scheduled a 28 date tour to take them through the UK and France. In July due to fan demand the band released Strip'em Blind Live again on their DA Label. Again it was off to France, Belgium and Italy for yet another tour in Europe in November of 2007.

During the European Tour in November the band was contacted and signed by Indie Label out of the UK Demolition. In January of 2008 Hydrogyn entered the studio to record DEADLY PASSIONS. This is the first of a three CD deal with Demolition that is due to hit the streets In June 2008.