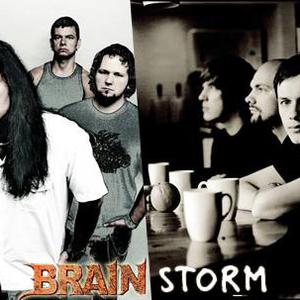 1) BrainStorm is a band from Latvia (also known as Pr?ta V?tra)
The beginning of BrainStorm is dated with year 1989 even thought the seeds was found already when singer Ren?rs and drummer Nick danced and sang together around Christmas tree at kindergarten and later on all members of the band sang the same lines at the choir of the school they all attended in their native city Jelgava, Latvia. Through the years knowing each other and making music together already fourteen years (they were 15 years old when formed the band) the chemistry between guys has created the atmosphere of the real family: ?Good old family thing, in this case just five fathers together. It's so hard sometimes to find just one way out of five?. This is what BrainStorm said about themselves and their unique chemistry by the end of 2003. And then in May 2004 stroke of the destiny took away one of them - in the car crash tragically died original bass player of BrainStorm - Muminsh (Gundars Mausevics).

In memory of dear friend Muminsh and faith in what is band' s calling BrainStorm decided to continue. BrainStorm by the end of 2004/beginning of 2005 has done recording of 7th studio album with producer Alex Silva with whom band recorded 2 songs on previous album. Between studios times in January band did joined American band REM as support act for 9 shows in Europe. New album will be called ?Four Shores? and is set to release in autumn 2005 with Latvian version release in Latvia in May. Anton Corbijn has done photos for the artwork.

The title ?Four Shores? underlines the sore place where BrainStorm has been placed after loosing the original band member and soulmate Muminsh in tragic car crash last May. The touch of the Muminsh lives through the new songs as the band started writing the songs for new album before the tragedy. It is obvious the lyrics have been influenced by this loss.

The experience of being citizen of Latvia who has been raised up in former Soviet Union and being witnesses of so called ?iron curtain? and Latvia' s return into Europe has made unique musical influence and background for the members of the band that reflects and goes through the music BrainStorm makes. Singer Reynard reveals: ?The truly first influences of BrainStorm I can name Russian cartoons and Latvian popscene in 80-s. Talking about cartoons - I still love those songs and listen to them time after time, they have some kind of unique happiness and sadness at the same time that is hard to describe and that's how I also see most of Stormer's songs. And only when we were some 14 - 15 we started to learn what happens on the other side of the moon.?

BrainStorm for several years is the biggest band of the native Latvia, latest 3 records they made and ?Best Of? has reached Platinum status on sales, every radio single goes straight to #1 on airplays, they gather several prizes each time nominated for Latvian Music Awards, they play as big crowds as tiny Latvia can gather and closing concert of their latest Latvian tour on 1st of September, 2003 gathered 25 000 big audience and beat the record of Skonto Stadium. But sooner or later it is time to go into international music scene and BrainStorm can be called ice-breakers in this field by being if not first that for sure one of the first band' s from Eastern Europe to enter Western music market. Their breakthrough was on 2000 with hit single ?My Star? and followed by album ?Among The Suns? (with releases in 18 countries, UK, Germany and Scandinavia including), album ?Online? released in year 2001 stormed over Eastern Europe (Gold in Poland) and Scandinavia with ethereally dreamy and catchy melody ?Maybe?. Over 3 years band has toured Europe on their own tours as well as supporting Rolling Stones in Prague, The Cranberries in Germany, Italy, Belgium and Czech, Depeche Mode in Baltic States and Supergrass in Denmark.

The previous album BrainStorm released was in 2003 ? ?A Day Before Tomorrow? ? the slideshow of life in 12 chapters called songs that shows band' s piece of mind and heart, the way they think and feel about this world. Here and now: ?The title of the album includes the philosophy we believe in ? we don't say simply - today, because ? of course you have to live in the moment you are, but also have to remember there is day after it and by remembering that you care about future, have your dreams and visions, but still ? you don' t let the beauty of the moment simply to slip away, because you value it and don' t live only in the illusion about unknown future.?

For making of their 6th studio album ?A Day Before Tomorrow? that was 3rd album for international release BrainStorm teamed with 2 producers ? Echo award winner Alex Silva (his credits include successful work on Herbert Gr?nemeyer' s album ?Mensch?, Suede, e.t.c.) and Steve Lyon (worked with Depeche Mode, paradise Lost, Reamonn, e.t.c.). Art-directon, logo and pictures for the album sleeve and press were made by famous rock-photographer Anton Corbijn.

2) Brainstorm is a power/thrash metal band from Germany, formed in 1989. The band features American born lead singer Andy B. Franck, who is also famous for his other band, Symphorce. They are known to play a somewhat darker style of music than most power metal groups.

Formed in 1989 by Torsten Ihlenfeld and Milan Loncaric on guitars and Dieter Bernert on drums, Brainstorm released their first demo "Hand Of Doom" after one year of existence. Following shows with Stormwitch, Exciter and Rage, the tracks "Kings, Queens and Sins" and "Law" appeared on a compilation LP. After completing their line-up with bassist Andreas Mail?nder, the band released the second demo "Heart Of Hate" in 1992, which quickly gained cult status in the local metal scene.
Initially unable to find a suitable singer, the band solved the problem when Marcus J?rgens joined the band, being named "Newcomers of the Month" by the German Rock Hard magazine with their third demo "The Fifth Season", released in 1994. After releasing yet another demo and single tracks on compilations, the band signed their first recording contract in 1997.

In 1999 the vocalist position became vacant again, but the band managed to fill it with Andy B. Franck (also in Symphorce). Finally everything was falling into place, and only two months after Franck joining, the band signed a contract with Metal Blade Records. The third album "Ambiguity" was recorded at House of Music Studio with Dirk Schl?chter and Sascha Paeth (Rhapsody) producing. Successful tours with Armored Saint and King Diamond as well as various celebrated festival appearances further cemented the band's popularity.

In March 2003 the band returned to the studio with Achim K?hler to record "Soul Temptation", already the fifth album in their career.

The band began writing new material in their rehearsal studio in September 2004 for next album "Liquid Monster" which was released in 2005.

Before the release of Downburst the band decided to re-release their first two full length albums "Hungry" and "Unholy" again. On those copies are also "the fifth season demo" (hungry), "heart of hate demo", "promo 96 demo" (both unholy) and up from the ashes (japanese bonus track on unholy).
Also in this time: The release of their first DVD "Honey from the BS". The main concerts on this dvd is thge show in Budapest (2005) and the 2004 Wacken show.
On the second DVD are excerpts from five different shows, the history of brainstorm and a videography.

The next album, "Downburst", was released in january 2008. The album was recorded in Wolfsburg. They also changed the producer (Sascha Paeth). They got a bit away from the soultemptation/liquid monster sound.
The line up changed during this record too. Andreas Mail?nder quit the band and was replaced by Antonio Ieva.

Only one and a half year later they released a new album called "Memorial Roots". This album was also recorded in Wolfsburg. Many songs are in mid-tempo.
Many people complain about the light sound on this album but this album still contains typical brainstorm songs.

3) Brainstorm is a genre-bending experimental pop group based in Portland, Oregon. A unique mixture of guitar-based art-rock, Saharan desert-blues, marching-band music, and old American spirituals, they skip playfully across borders and styles. Portland's Brainstorm consists of Adam Baz and Patrick Phillips who, between just the two, play electric guitar, drums, tuba, synth, and sing. They released their debut album "Battling Giants" on Lasercave Records in 2009.

In Fall 2010 Brainstorm released a 7" EP, "Beast in the Sky" through up-and-coming Portland label High Scores & Records. The Portland Mercury describes "Beast in the Sky" as "an indie rock sound approached from a bird's-eye perspective?and leavened with Old Weird America, white-kid math, African blues, instrumental post-rock, and classic soul." Baz and Phillips supported the record on a successful US tour with label-mate Jeffrey Jerusalem in October.

4) Brainstorm was an American funk and R&B band, based in Detroit, Michigan in the late 1970's. Their debut album, Stormin' , was their best selling album, and was released in 1977 on Tabu Records. It contained the disco hit single "Lovin' Is Really My Game". The album also contained the radio hit "This Must Be Heaven", which is considered a soul classic.

Members of Brainstorm continued their musical careers with other bands. Woods later went on to perform as part of the Parliament-Funkadelic collective in touring sets around the world. Sims became the trumpeter for the Sounds of Blackness, which won two Grammy Awards during the 1990s. Bright went on to play trombone with the funk band Cameo for over twenty five years, and later released an album with other former Cameo members Aaron Mills, and Thomas TC Campbell, known as MCB (which was also the title of their album).

5) Brainstorm were also a German band in the 1970s that played a vuagely Canterbury-influenced type of music. Zappa too is also an influence. This can be heard in the jazzy songs and complex arrangements, as well as the general humor of the band.


6) Brainstorm is also an alias of Richard Melville Hall (Moby).

7) Brainstorm were a Avantgarde Doom/Death metal band from Sumy, Ukraine active in 1992. They recorded live at "Day of Darkness III" July 6, 1995 in Gomel which was released on a 7"
vinyl. The band formed in 1992 under the name of Temptation, they soon changed for Brainstorm (Ukr) till 1997, since 1997 they are called Graal. Under "Brainstorm", they released a demo and an EP in the mid-nineties.

8) Brainstorm Is an emcee from Seattle. He is a member of the group Dyme Def and makes beats as well. He won the Redbull Big Tune beat battle in 2007.

9) Brainstorm was a hardcore band from Salt Lake City, UT in the late 80s to early 90s. They released a demo and a self-titled 7". Members went on to Iceburn.

On The Spur Of The Moment