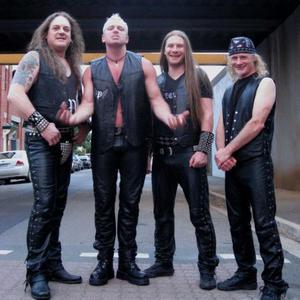 The band was formed in 1993 by guitarist Johnny Stoj with his brother Robbie on drums. After cultivating a visual and musical style similar to bands like Judas Priest and Manowar, Pegazus recorded a self-titled album in 1995 with Justin Fleming on vocals and Dave King on bass. The following year, Fleming Quit the band Danny Cecati joined and the band recorded a new demo and began seeking a record deal. Linking up with Melbourne's Metal Warriors, the band's second album Wings of Destiny was released locally in 1997. After receiving a copy of the album, Germany's Nuclear Blast offered the band a contract and released Wings of Destiny worldwide with more distinctive, professional artwork.

In August 1998, Pegazus travelled to Germany to perform at the Wacken Open Air festival. The show was remarkable only not as the first the band had ever played outside Melbourne but because they appeared at the festival twice, on the main stage and again on a side-stage later as a replacement for Darkseed. Following Wacken, Pegazus returned to Australia briefly before going back to Europe in September for a tour with HammerFall. Eric Martins played bass at all of these shows as King had left the band.

Corey Betts joined Pegazus as King's replacement in January 1999 and very little was heard from the group until the Breaking the Chains album was released late in the year. Controversy followed shortly after when it was revealed in March 2000 that Cecati had been fired for apparently devoting too much time to another Melbourne band called Anarion. Cecati countered by claiming that he had become frustrated with the virtual inactivity of Pegazus as a live act and Johnny Stoj's creative control over the group. He subsequently also left Anarion and joined Eyefear in late 2000.

In September, Rob Thompson replaced Cecati. Pegazus then toured interstate in January 2001, playing its first shows outside of Melbourne since the European tour in September 1998. At approximately the same, Betts formed another band, Kymera, with ex-members of Cyclone Tracy and Catwitch, but would remain with Pegazus until after the recording of the next album. Kymera would later become Black Majesty.

2002's The Headless Horseman was the first Pegazus album in three years and would prove to be its last for Nuclear Blast. Following Betts' departure, Black Majesty guitarist Hanny Mohammed became the band's bass player for its infrequent live appearances. Robbie Stoj then left Pegazus in September 2003, with Bernie Goldstein temporarily filling the role, the band recorded some performances for a live album. In the meantime, the group's relationship with Nuclear Blast came to an end with Pegazus claiming the label had virtually ignored its previous release. The live album Live! ? Thunder Down Under was released independently by the band in February 2004. At around the same time, Robbie Stoj was finally replaced by Ange Sotiro and Betts by Joe Fata, who had ironically also replaceed him briefly in Black Majesty.

for more info on the band:
http://www.pegazus.net/

In Metal We Trust