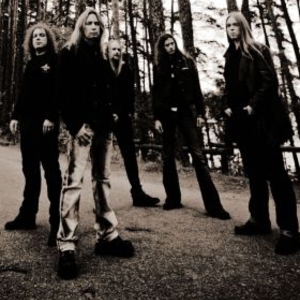 Stratovarius is a power metal band from Finland. They became popular in the '90s, and throughout their career have inspired upcoming power metal bands with their baroque arranged keyboard solos & Ritchie Blackmore-like guitar portions. Stratovarius was founded in Finland in 1982 from former members of the band Black Water. They went through a number of personnel and musical changes before the band found its own voice. The founding members were Tuomo Lassila, Staffan Str?hlman and John Viherv?.

Stratovarius was founded in Finland in 1982 from former members of the band Black Water. They went through a number of personnel and musical changes before the band found its own voice. The founding members were Tuomo Lassila, Staffan Str?hlman and John Viherv?. In 1983, the name was changed to Stratovarius (a portmanteau of Stratocaster and Stradivarius), an idea of Str?hlman's. By 1984, Timo Tolkki entered the band, replacing Str?hlman in the guitar. He took up the vocal duties as well. Tolkki became the driving force and mastermind of the band assuming almost complete control of the song writing. He brought along not only strong rock influences but also a neo-classical tinge. The band released a demo to various record companies by 1987, finally being picked up by CBS Finland. In 1989, their debut album Fright Night was released followed by two singles.

After being dropped by CBS the band went through several member changes but they managed to release on another label and they also toured a bit. In 1994 they released their third album, Dreamspace, featuring new bass player Jari Kainulainen, (who joined the band when 70% of the new material was already recorded) which was a great success. Tolkki decided to stop singing for the band and they hired a new full-time singer, Timo Kotipelto. The release of Fourth Dimension in 1995 was a great success, but internal differences in the band particularly about the style the band was going for, prompted the departure of long-time drummer Tuomo Lassila and keyboardist Antti Ikonen. Two new non-Finnish members were recruited: Swedish keyboardist Jens Johansson of Yngwie Malmsteen fame; and German drummer J?rg Michael. With the fifth release Episode, Stratovarius had finally found its sound and had a strong, diverse line-up. Episode was a grand project featuring a large choir and a string orchestra. It spawned some of the all-time greatest Stratovarius hits, such as "Father Time" and "Will The Sun Rise".

This line-up released three hugely successful albums over the years: Visions in 1997, Destiny in 1998, and Infinite in 2000. With every album their fame and fan-base expanded and they started gaining a stronger following outside the Nordic countries particularly in Japan.

In 2003 the band released its most epic project yet, the two album suite named Elements. With these albums they reached a peak in their progressive and symphonic style of power-metal. The first album, Elements pt. 1, was released in early 2003 followed by a world tour. Elements pt. 1 was naturally followed by Elements pt. 2, also released on Nuclear Blast records in the same year with the hit single "I Walk To My Own Song".

In late 2003 the band broke up with Timo Kotipelto and J?rg Michael leaving after a very vaguely explained conflict. Tolkki hired a new singer, Katriina ''Miss K'' Wiiala, and Anders Johansson of Hammerfall (Jens's brother) temporarily on drums. Tolkki's behaviour rapidly began to become extremely strange. He published a long news article on the band's website, detailing how he had converted to Kabbalah after reading Madonna's autobiography and being contacted by Jesus himself. He wrote extensively on the principles of Kabbalah but according to some Jewish forum members, this has nothing to do with any actually practised form of it. The webmaster removed the news article from the site. Then Tolkki even stabbed himself in the shoulder first claiming that a crazy Spanish fan had done it because of band had broken up. Tolkki also phoned Anders Johansson, speaking nonsense about Adolf Hitler ? Anders freaked out and left the band. Nobody really understood the situation and fans were worried about Timo's mental condition. In April 2004 he was hospitalised with chronic depression and a nervous breakdown and, after being released from the mental hospital, negotiations and attempts at reconciliation with the rest of the band began. The rest of 2004 was virtually complete silence from the band.

In January 2005 an announcement was released that Stratovarius had reunited with the old line-up. Tolkki seemed to have recovered from his strange illness. In June 2005 Timo Tolkki announced that the band's bassist, Jari Kainulainen, had left the band due to personal reasons. He was later replaced by Lauri Porra.

Stratovarius then released the self-titled album Stratovarius in September 2005 featuring the popular single "Maniac Dance". During this time Stratovarius began a world tour starting in Argentina. It also included a North American leg where they toured the United States and Canada for the first time in the band's history. They played at such events as Atlanta's "Prog Power", and in well-known venues such as "B.B. King's House Of Blues" in New York and Philadelphia's "Trocadero Theatre". The tour also included some European and Japanese cities.

On April 2 2008 Timo Tolkki announced on his official website that the band has officially stopped due to various issues between the band members.
Timo Tolkki has formed a new band, Revolution Renaissance. He will release his first album on june 6, 2008 and it will feature guest appearences by Michael Kiske (ex-Helloween) and Tobias Sammet (Edguy, Avantasia)

The band has since made an announcement on the Stratovarius website stating that the band will continue without Timo Tolkki.

After the announcement, the band began to search for a new guitar player, making the announcement on the band's official forum and in soundi magazine that Matias Kupiainen would replace Timo Tolkki and that 15 songs had already been demoed for the new album.

Early 2011 saw the release of their new album, Elysium, containing the songs that were written during the Polaris tour.