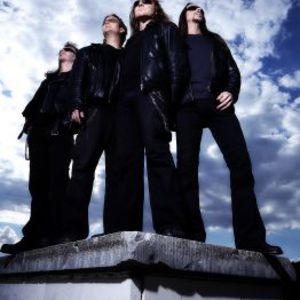 Founded in 1989 by Kai Hansen in Hamburg, Germany after leaving Helloween, Gamma Ray borrowed straight from the Helloween classics, and continued to pioneer Hansen's style of power metal. After four years with Helloween, Kai Hansen decided to leave the band at the height of their career. He then went on to do some studio work with Blind Guardian. Kai and his friend Ralf Scheepers from Tyran' Pace decided to start a project. They recruited bassist Uwe Wessel and drummer Mathias Burchard. The resulting sound was very close to Helloween's power metal style.

After four years with Helloween, Kai Hansen decided to leave the band at the height of their career. He then went on to do some studio work with Blind Guardian.

The first album Heading For Tomorrow was released in 1990. Two lineup changes resulted in Uli Kusch (who would later join Helloween) becoming the bands second drummer and Dirk Schlachter becoming a new guitarist. The new lineup released the Heaven Can Wait EP.

In 1991 the band released Sigh No More, which resulted in a 50 date world tour.

In 1993 Uli Kusch left the band and was replaced with Thomas Nack and Jan Rubach who replaced Uwe Wessel as the new bassist. The resulting cd was Insanity and Genius. Later that year, along with Rage, Helicon and Conception the band played on a tour called "Melodic Metal Strikes Back". This resulted in a double CD release and video called Power of Metal. They also released Lust For Live which did not feature the other bands.

The band were ready to start work on a fourth album, things were put on hold after vocalist Ralf Scheepers auditioned to be the new vocalist for the legendary metal band Judas Priest, his chances were considered good and with no hard feelings, Hansen and Scheepers decided it would be best if Ralf left the band. Kai Hansen took up guitar and vocal duties.

In 1995 the album Land of the Free was released, fans and critics were very impressed with the release and it is still considered to be the bands most popular release to date amongst fans. The band toured and released the live album Alive 95 in 1996.

More lineup changes resulted in Jan Rubach and Thomas Nack leaving. Dan Zimmerman (who is also a member of Freedom Call) became drummer and Schlachter decided to change from guitarist to bassist. Henjo Richter was brought in to become the bands new lead guitarist. This lineup is still the current Gamma Ray lineup as of 2008.

1997 saw the release of a concept album named Somewhere Out In Space, this album focused on the band's fascination with the universe. The band then toured and finally released the album Powerplant. This album had a similar approach to lyrics as the previous album but took a new musical approach. The album was highly acclaimed throughout the world.

The "Best of" album named Blast From The Past was released with songs from the Scheepers era being re recorded with the new members and Hansen on vocals.

After the recording of a new album which was yet to be named the band took a year off.

After this break, which saw Hansen focusing on side project Iron Savior, the band released No World Order, an album which sounded like no other the band had released. This album showed the bands main influences, classic metal bands such as Judas Priest and Iron Maiden. The band set off on the No World Order tour which saw them tour Europe and Japan. After a short break the band went on tour again, this tour was called the Skeletons In The Closet Tour. What was special about this tour was that the set list was chosen by fans of Gamma Ray on the offical website. Two shows were recorded and the album called Skeletons In The Closet was released.

The next studio album was released in 2005, the first since the 2001 release, No World Order. This album was called Majestic. This reached respectable chart positions such as number 20 in Sweden, number 28 in Finland and number 39 in the band's home country Germany.

In November 2007, the band released Land of the Free II, a follow up to the 1995 album Land Of The Free which follows the same concept. After the release of this album, Gamma Ray joined up with Helloween for the Hellish Rock tour which ended in October of 2008.

A live DVD was recorded on May 6th, 2006 in Montreal, Quebec. Under the title "Hell Yeah! The Awesome Foursome (and the Finnish keyboarder who didn't want to wear his Donald Duck costume) Live in Montreal" and was released on November 4, 2008. The release, which was plagued by setbacks, also included a third disc which contains a road movie shot during the European leg of the Hellish Rock tour in 2008 and 4 songs from "Land of the Free II" which were recorded live in Spain.

A companion double live CD was also released on November 4, with the same name and contains all the songs from the 2006 Montreal concert and the 4 songs recorded in Spain in 2008.

Gamma Ray played several festivals in 2009, spending the bulk of the year working on their forthcoming album. There they debuted the first new song entitled "To the Metal" which is also the title of their 2010 release.

"To The Metal" will be released January 29, 2010, and the band will commence a European tour starting February 6, 2010 in their home city of Hamburg, Germany with Freedom Call and Secret Sphere.