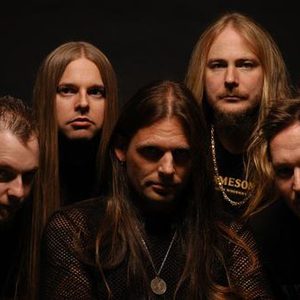 Originating from 2 Swedish metal bands ,1986 formed Damage's lineup with 85' former Sepher Jezirah vocalist, replacing the second guitarist, the band changed their name to "Morgana Lefay" before releasing a self-financed album named "Symphony Of The Damned" in 1989 with glowing reviews and responses. The second release dubbed "Rumours of Rain" in 1991 was a demo tape of convincing quality, which got them a contract at the Black Mark label, in 1993 releasing "Knowing Just as I" album , echoing worldwide, followed by a european tour.

fter another second guitarist replacement, a third 1995 "Sanctified" album is released. Taking a festival like European tour with, Tad Morose, Memento Mori & Cemetery, and another one with Gamma Ray later that year. Releasing 1996 "Maleficium" & 1997 compilation "Fata Morgana", changing their name to Lefay for legal reasons concerning a dispute with the label; signing for Noise Records and releasing the 1998 "The Seventh Seal" & 1999/2000 concept "...---..."(SOS) albums.
Ending the contract with Noise Records, followed by long pause, made the band to reactivate themselves, taking the full name "Morgana Lefay" , returning to the former label Black Mark and releasing the 2005 album "Grand Materia", followed by 2007 "Aberrations Of The Mind".

Often neglected for their mid to slow paced brooding heavy metal, yet a not unjustified approach to songwriting in the same power/heavy metal genre of cliche's. Everything about this band puts them ahead of their time, symphony involved approach in the early days when it wasn't a trend driven addition to the already high quality music, especially the trash tinged riffs, savoring an abandoned genre and not crossing it but rather blending & and putting it to good use again.Although having a musical identity of their own, they don't get avoided by the genre-labeling scientists, Charles Rytk?nen's dramatic and sometimes haunting vocals get often compared to Jon Oliva's but in a positive way.

Over and Over Again CDS

Aberrations of The Mind

Symphony Of The Damned