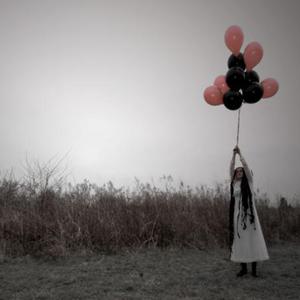 Hungry Lucy began by chance in 1998 when War-N Harrison (Fishtank No.9) was asked to contribute to a Depeche Mode tribute album. War-N asked vocalist/lyricist Christa Belle to record vocals for the song "Blue Dress". The couple found they worked together so well that Hungry Lucy was born. After spending a year writing and recording, the Autumn of 2000 saw the release of Hungry Lucy's debut CD, "Apparitions".

After spending a year writing and recording, the Autumn of 2000 saw the release of Hungry Lucy's debut CD, "Apparitions". The album garnered much attention across the US and Europe for its combination of pop song structures, trip hop grooves and Christa's haunting vocals & other-worldly lyrics. The attention to their debut CD lead to a licensing deal with Belgian label Alfa Matrix and subsequent European relase of Apparitions:Revisited in Fall of 2001.

After spending Spring and early summer of 2002 performing live, Hungry Lucy completed their next full length album entitled "Glo". Glo captures all the elements that Hungry Lucy are known for while continuing to explore other genres such as jazz, blues and europop. Once again, the album received critical acclaim and glowing reviews worldwide and expanded Hungry Lucy's reach to a much wider audience.

In the Summer of 2003, Hungry Lucy embarked on a tour with Pittsburgh's ThouShaltNot across the Western and Midwest regions of the United States. This gave people a chance to hear, as well as see, what Hungry Lucy is all about. True to form, Hungry Lucy delivered stunning performances along with synchronized video accompanyment. Several one-off shows in late 2003 / early 2004 (including performances with Cruxshadows & Wolfsheim) followed.

In Spring of 2004, it was time to head back into the studio and capture the new material Hungry Lucy had compiled over the preceding months. The result, Hungry Lucy"s 3rd full-length CD, "To Kill a King" was released in Nov. 2004 to critical acclaim from both fans and the media alike, debuting at #9 on the French Alternative Charts in January, 2005. In addition to college and club DJ exposure, "To Kill a King" has been featured on Public Radio programs such as PRI's "Echoes" and the X-Star Network's "Audiosyncracies". The album brilliantly displays Hungry Lucy"s passion for musical contrast and clever songwriting for which this duo is known.

Hungry Lucy released their 4th album, The Pulse of the Earth, in 2010.

Pulse Of The Earth

Before We Stand ... We Crawl

To Kill a King