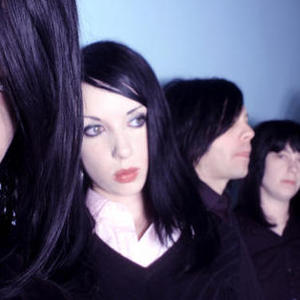 Scarling. is an alternative rock band from Los Angeles, USA, whose music contains elements of shoegaze, noise rock and gothic rock. They have been active since 2002, and have released two full length albums. One of Scarling.'s many definitions is the smallest mark left on your heart - yet after hearing Scarling. the band, you'll agree their sound is anything but small. With the release of 2004's critically acclaimed "Sweet Heart Dealer" (Produced by Chris Vrenna), an album that ultimately led them to a Short List Award Nomination, Scarling.

One of Scarling.'s many definitions is the smallest mark left on your heart - yet after hearing Scarling. the band, you'll agree their sound is anything but small. With the release of 2004's critically acclaimed "Sweet Heart Dealer" (Produced by Chris Vrenna), an album that ultimately led them to a Short List Award Nomination, Scarling. has been capturing the hearts of their steadily growing cult fanbase, with their knack of redefining noise and chaos within the context of pop songs and expanding the ventricles of gloomsters and fey indie rockers alike. In 2004, Robert Smith handpicked Scarling. as one of the seven acts to tour with his Curiosa Festival, along with Interpol and Mogwai. When asked about how she felt being able to play with one of her long time favorites, Jessicka simply replied: "The Cure has always been one of the only bands I found worthy of surrendering everything in exchange for nothing. They have yet to break my heart."

Although The Cure's influence is evident, it's the collision of their collective diverse influences as well as the ability to properly utilize feedback and noise that gives Scarling. their signature sound. A sound created roughly six years ago in Los Angeles, when noise theorist Christian Hejnal and surname-free singer Jessicka bonded over an unbridled hatred of the legion of clinging parasites and soulless zombies choking the life out of music. After a series of 7" singles on Sympathy, Scarling. announced in early 2005 that their second album "So Long, Scarecrow" would appear later that year; it was preceded by the single "We Are the Music Makers", and was released on October 23, 2005.

The critical reception for Scarecrow was generally strong: Alternative Press gave the album a [5/5] rating and described Hejnal as a "guitar physicist who holds court over these atmospheric rockers' second album, approximating everything from space-station climates to sperm whales rollin' on E, all the while delivering solid songs."
The Independent noted ?Scarling. work up a wonderfully hazy guitar swirl, reminiscent of post-My Bloody Valentine noise-pop from the Britain of the early nineties.?
And Bust (magazine) described the album as "the musical equivalent of an Edward Gorey illustration: ominous and shadowy, but not without a certain sense of morbid joy. Sly lyrics and sarcastic insights pepper Scarecrow's dystopian soundscape."

SLS's first single "City Noise/Staring To The Sun" was released on 6-6-06 and is featured on the compilation "Alright, This Time Just the Girls Vol. 2" and in the documentary The Treasures Of Long Gone John. Scarling.'s music has been featured on Showtime's The L Word television series, and an episode of the medical drama Grey's Anatomy is entitled Band Aid Covers The Bullet Hole. In 2006 Scarling. continue to tour in the US and Europe and are expected to begin working on their third full length album in 2008.

Staring To The Sun