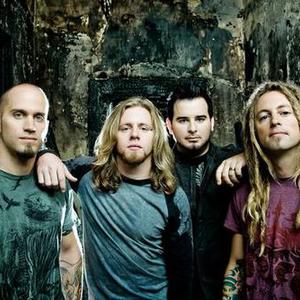 A band for just the past four years, Decyfer Down has already received solid airplay from mainstream modern and active rock stations in their hometown region of North Carolina, including WARQ in Columbia, South Carolina. Commenting on their early support of the band, the station's Music Director Matt Lee remarked, "From the first time I saw Decyfer Down, I knew that they were something special. They had an incredible stage presence to accompany their brilliant live show. Previous to seeing them perform, there was a buzz brewing on the local music scene about them and they lived up to it.

This is a band that 'gets it' and will truly become great once given the chance. The have pulsing melodies with heartfelt, deep lyrics that ANY rock fan will be quickly turned on to. WARQ has been spinning Decyfer Down's 'I'll Breathe For You' for a couple of months in our 'Eleven O Clock News' feature to a wonderful response from our listeners."

The band has also already shared the stage, in festivals and concerts such as X-fest 04' and Shoutfest 03',and 05', with a diversity of national acts including Cold, Puddle of Mudd, Breaking Benjamin, Strata, Theory of a Dead Man, Smile empty soul, Authority Zero Crossfade, Future Leaders of the World, Seven Mary Three, Adema, Skillet, Tree 63, Jars of Clay, Day of Fire, Spoken, Tait, Disciple, Seventh Day Slumber, Jeremy Camp and more.

"DECYFER DOWN is a great band with a bunch of great guys. They were one of the hits of Shoutfest in '05 and promise to be one of the big bands of tomorrow." commented booking agent Jeff Roberts.

Drummer Josh Oliver and guitarist Brandon Mills started the band at a time when each simply needed to renew his life in God. For Oliver, it was a case of being burned out on religion, while for Mills, it was a time to surrender a life of parties and drugs and return to his faith. "We were just trying to crawl our way back into a deeper understanding of God-for him to heal the wounds we had in our own personal lives," says Oliver. "The music began to change and evolve as our walk with God did."

As the word "decipher" means "to interpret," the moniker Decyfer Down fit perfectly, as the band aimed to interpret truth based on God's Word while stripping it down from religious traditions and terms. Josh comments, "We're simply out to give a positive message of hope that has truth streaming all the way down the middle of it."

Its focus made clearer, Decyfer Down resolved to be black and white about truth and captured the confusing parts of time past in an album of songs appropriately titled End of Grey. Produced by Jim Cooper and Tony Palacios, the project is an explosive album that features melodic hard rock, anthem-sized songs featuring ringing guitars that melt and morph into vicious riffs, with songs filled with searching and waiting, honesty and hope.

"The album represents the places we've been and struggles we've gone through, and interprets that," says Caleb, the band's primary lyricist. "All the songs go back to a theme of being real and honest, and not being ashamed of talking about the truth."

The Other Side Of Darkness