Juliette And The Licks 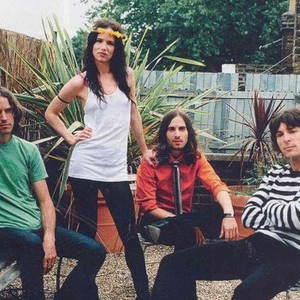 Juliette and the Licks was a rock band from United States which was led by American actress Juliette Lewis. Other band members included guitarist Todd Morse (of H2O), bassist Jason Womack and drummer Ed Davis. Kemble Walters used to play lead guitar for Juliette and the Licks until it was announced on their MySpace page that Kemble Walters had decided to go back to his original career as leader of his own band.

Juliette and the Licks are finishing their tour with a temporary player until a more permanent player will be found. Singles include 'You're Speaking My Language', 'Got Love To Kill', and 'Hot Kiss'.

They are well known for their explosive live performances. The band is still performing as of June 2006 and is occasionally erroneously billed as Juliet and the Licks.

Morris left the band before sessions for the second album (the third, if you count the ... Like A Bolt Of Lightning EP, too) had begun. Juliette and the Licks then recruited Foo Fighters frontman Dave Grohl to fill the gap. Grohl then went on to ask the Licks to be a guest act at the Foo Fighters sell out Hyde Park performance on the 17 June, 2006 to around 85,000 people (other acts were Angels and Airwaves, Queens of the Stone Age and Mot&ouml;rhead). At the same event, Lewis and Moa Holmsten from Meldrum came on stage for one of Mot&ouml;rhead's songs to do backing vocals.

Their most recent album is called Four On The Floor and was released October 2nd 2006. Finally with Dave Grohl to play drums on the entire album.

Four On The Floor (Japanese Edition)

You're Speaking My Language