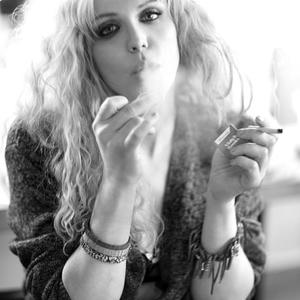 [1] Courtney Love (born Courtney Michelle Harrison on July 9, 1964) is the lead singer, lyricist, and rhythm guitarist for the alternative rock band Hole. Love is also a solo artist, an occasional model and actress. Love was born in San Francisco, California to psychotherapist Linda Carroll and Hank Harrison, a short-lived manager for The Grateful Dead. Love began her professional music career with a brief stint as the lead singer of Faith No More in the 1982. Shortly, she was kicked out of the band, due to the band wanting a male singer.

Love began her professional music career with a brief stint as the lead singer of Faith No More in the 1982. Shortly, she was kicked out of the band, due to the band wanting a male singer. Three years later, she formed an all-female pop-rock band called Sugar Babydoll with Kat Bjelland and Jennifer Finch, and later - also with Bjelland - the Pagan Babies. Love had greater early success as an actress, appearing as the best friend of Nancy Spungen in Alex Cox's Sid Vicious biopic Sid and Nancy in 1986, and in Cox's Straight to Hell in 1987, as well as small roles on television episodes.

Returning to music in Minneapolis, Minnesota, Love claims she co-founded the all-female rock band Babes in Toyland with Kat Bjelland in 1987, but others deny it;. Acrimony between Love and Bjelland led to Love's quick exit from the band. The band's biographer claims she stole house receipts to a Butthole Surfers concert. In 1989, Love formed her own band, Hole, with guitarist Eric Erlandson. The band's 1991 debut album garnered little critical or popular attention in the United States but was celebrated in the influential British alternative-music press. Already a star in England, Hole's fortunes improved considerably wtih Love's marriage to Kurt Cobain and the publicity about Cobain's death.

Unpopular with some Nirvana fans (comparisons to Yoko Ono were made early on and persist to this day), Love's image was further tarnished by a 1992 article in Vanity Fair entitled ?Strange Love,? in which she admitted to using heroin in the early stages of pregnancy. As a result, Child Welfare Services briefly investigated the Cobains' fitness as parents. Love claims to this day that she was misquoted, saying she had told author Lynn Hirschberg that she had stopped using it once she learned she was pregnant.

Like Axl Rose, Love was ridiculed in the press for her abrasive, sometimes erratic behavior, such as cursing at paparazzi and publicly harassing Cobain's former girlfriend, folksinger Mary Lou Lord.

Shortly before the release of Hole's breakthrough album Live Through This in April 1994, Cobain committed suicide. Love read his suicide note at a televised memorial a few days later, sobbing hysterically and alternately cursing her husband as a ?fucking asshole? and pleading with him to come back. Hole's bassist Kristen Pfaff died of drug overdose two months later. She was replaced by Melissa Auf Der Maur later that year.

Love was a fashion trend-setter. In her early career, she modelled a ?kinderwhore? look, which she was accused of having ripped off from Bjelland, although other sources suggest that the ripoff was in fact in the opposite direction. Love stated that the look was inspired by Christina Amphlett of 1980s rock group The Divinyls, most famously in a lengthy phone message recorded and subsequently released by The Muffs, who had ironically titled their album Blonder and Blonder after a sarcastic quote by Love regarding lead singer Kim Shattuck. Love's style has since evolved, and she has modeled for more sophisticated designer labels.

Love received considerable acclaim for her role as Larry Flynt's wife, Althea, in Milos Forman's 1996 film The People vs. Larry Flynt, opposite Woody Harrelson as Flynt. She was also praised for her supporting role in the 1998 Andy Kaufman biopic Man on the Moon, which starred Jim Carrey as Kaufman. Other notable film credits include Basquiat, 200 Cigarettes, and Feeling Minnesota.

Love released solo album ?America's Sweetheart' in 2004, which contained a lot of collaborative work with Brody Dalle of The Distillers. She has now resurrected the Hole name and is due to release a new album ?Nobody's Daughter' in 2010; this album contains some tracks from the never released album ?How Dirty Girls get Clean'. Courtney Love is the only surviving original member in the new Hole line up.

[2] Courtney Love is also the name of a band with Lois Maffeo and Pat Maley (Yoyo Recordings Founder). There are multiple explanations for the name, but this was before Love herself became famous. The duo would release three well-regarded 7? singles on K Records and a few compilation tracks, but no albums. They disbanded on 1991.