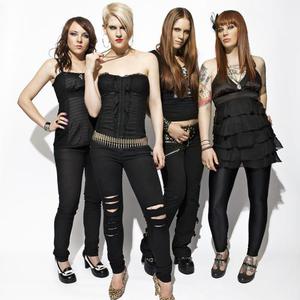 Morgan Lander (guitar/vocals) Mercedes Lander (drums) Tara McLeod (guitar) Trish Doan (bass) Kittie have never been for the faint of heart, but on new release I've Failed You the Canadian quartet redefine the scope of their heavy metal vision. They forge extreme anger with extreme vulnerability, splatter innocence with a foreboding doom, and bleed beauty and ugliness into a swirling aural mask.


Kittie have never been for the faint of heart, but on new release I've Failed You the Canadian quartet redefine the scope of their heavy metal vision. They forge extreme anger with extreme vulnerability, splatter innocence with a foreboding doom, and bleed beauty and ugliness into a swirling aural mask.

I've Failed You leverages the raw nerves of a brittle psyche against an unyielding human spirit, and elevates Kittie to all new extremes.

"This is a very sad album and it's a very heavy album, it's something I had to get out," says frontwoman Morgan Lander. "The last two years between In the Black and now have been extremely difficult, and a lot of things have impacted the lyrical content. We've pretty much gone through an entire life upheaval and a lot of changes, and these songs tell a story - it's the downfall of a relationship, coming to terms, and finding the strength to move on."

In itself, that's something new for the band's principal lyricist, who is more accustomed to burying her heart, rather than wearing it on her sleeve. "I feel like I veil a lot of things and make them ambiguous so our fans can think what they'd like, but with this album I really put it all out there and am totally honest. It's okay to be upset, it's okay to be human. This is an honest album, and it's something that a lot of people can relate to - I feel weird talking about the content and sharing that part of my life, but I feel like it makes for a much better experience."

Ironically, the album's lead single "We Are the Lamb" was the only track with lyrics by Mercedes Lander - Morgan's sister and Kittie's drummer. "It's weird how that song came about - I was watching TV and thought, ?holy fuck, I need to write a song...' and it literally came out that fast," says Mercedes. "It's about coming to terms with the fact that sometimes things need to be sacrificed before we can move on. The song just really brought everything on this album into perspective for me..."

"We Are the Lamb" has the bludgeoning feel of pummeling fists, with razor-sharp lyrics that rip at the skin like barely hanging scabs, an appropriate first single from an album that re-imagines everything we thought we knew about one of modern metal's most definitive acts. "The torch is passed on, we are the lamb!" screams Morgan with blood-curdling intensity, exposing a keen insight into loss that makes I've Failed You as a compelling an album lyrically, as it is musically.

Where the band describe In The Black as the album that refocused their sound, renewed their energy, and laid a foundation to move forward artistically, I've Failed You builds on that skeleton, casting flesh and blood upon the roots they've planted. The album is splashed with embellishments, heightened by dynamics, and characterized by a growth and maturity that can only come with more than 12 years history as a band.

"Life is growth and movement, and if you look at the last two albums that's exactly what we've done," Morgan explains. "All four of us have really diverse tastes, to the point where Mercedes doesn't even acknowledge the metal scene anymore - and that's a good thing. You can't always identify with the stuff that moved you when you were 16, so you need to broaden your horizons to things that appeal to you in your 20s - and that increases the diversity of the output of the music. We understand that better than ever now, and we have a very good grasp of who we are as a band.

"All of these songs were written together, which makes for an interesting listen. We all have particular ideas about where things should go, and that diversity helps make things interesting and cool. Guitar wise, Tara and I are very different in what we do, but it works and we complement each other. We play off each other. It's cool that we've gotten to that point where we're in each other's heads - obviously Mercedes and I have a long history, but now we have that sense of never knowing what's coming around the corner as a band, and that's an amazing place to be."

"This album is us doing exactly what we needed to do," adds Mercedes.

I've Failed You charts Kittie's progression as a band, while also charting their evolution as adults. It stares death in the eye, and engages the feelings of anger, guilt, frustration and confusion that follow. The album is not a collection of songs about grief, it is an album that follows a treacherous path of grieving to reach the understanding and acceptance of closing track "Time Never Heals," a somber missive that embraces the heartache of loss as an inevitable vehicle for growth.

In the end, that is I've Failed You at its core - it is an album about being human, and an album about surviving tragedy to embrace life. There's not a subject matter more heavy or extreme, and that suits Kittie just fine.

- Another misconception is that the song This Town is done by Korn and Kittie, when it is actually Jonathan Davis of Korn and Human Waste Project.

- Another common misconception is that Talena Atfield played bass on Kittie's debut album Spit. In actuality Tanya Candler, Kittie's original bass player, played on Spit with the exception of the song Paper Doll which Morgan Lander took on bass duties. Morgan Also fixed many of Atfield's mistakes on the album Oracle but was never credited.