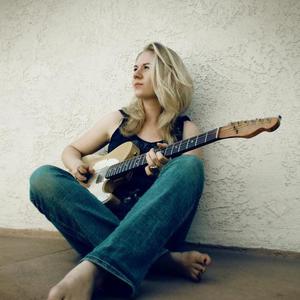 For the last couple of years, Joanne Shaw Taylor has been busy redefining the cliche, plays like a girl. How did you spend your summer vacation when you were 17? She spent hers touring Europe with the supergroup D.U.P. with fellow band members Dave Stewart (Eurythmics), Candy Dulpher (Prince), Mudbone Cooper (Parliment-Funkadelic) and Jimmy Cliff. If you can imagine the love child of Stevie Ray Vaughan and Dusty Springfield then you are beginning to get a feel for Joanne's mixture of fiery guitar playing, sultry vocals and 100% pure soul.

But unlike many other young phenoms, she has quickly developed a resum? to back up the hype. Born and raised amidst the coal mines of Britain's Black Country, she picked up a guitar and got turned on to the blues as a very young teenager.

Dave Stewart first discovered Joanne when he saw her play at the tender age of 16. He describes his reaction as follows. 'I have played with all sorts of blues musicians all over the world, such as R.L. Burnside and Jesse-Mae Hemphill. I heard something I thought I would never hear, a British white girl playing blues guitar so deep and passionately it made the hairs on the back of my neck stand on end! Not only was I in total shock but it took me a good few minutes to ask her how long she had been playing like that. "A few years," she replied. "How old are you now?" "Sixteen." I woke up a few seconds later on the floor.'

Jo has been touring the U.K. with her own band since she was 14, headlining top clubs such as Ronnie Scott's and the Marquee; she has also performed at several of the top European festivals, playing alongside many of her heroes like B.B. King. It is a safe bet that Ms Taylor is the only teenage girl invited to sit in on one of Bill Wymans recording sessions.

Her own writing has led her to something beyond the blues, a soulful mix of roots and pop influences sung in a haunting smoky voice.

Blues From The Heart Live

Diamonds in the Dirt