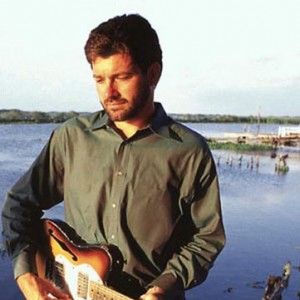 Tab Benoit (born November 17, 1967 in Baton Rouge, Louisiana, United States) is a blues guitarist, musician and singer. He plays a style that is a combination of Swamp blues, Soul blues and Chicago blues. He plays Fender guitars and writes his own music compositions. Benoit graduated from Vandebilt Catholic High School in Houma, Louisiana in May, 1985. In 2003, he formed an organization promoting awareness of coastal wetlands preservation known as "Voice of the Wetlands."

A guitar player since his teenage years, he hung out at the Blues Box, a music club and cultural center in Baton Rouge run by guitarist Tabby Thomas. Playing guitar alongside Thomas, Raful Neal, Henry Gray and other high-profile regulars at the club, Benoit learned the blues first-hand from a faculty of living blues legends. He formed a trio in 1987 and began playing clubs in Baton Rouge and New Orleans. He began touring other parts of the south two years later and started touring more of the United States in 1991- and he continues to this day.

Benoit landed a recording contract with the Texas-based Justice Records and released a series of well-received recordings, beginning in 1992 with Nice and Warm, an album that prompted comparisons to blues guitar heavyweights like Albert King, Albert Collins and even Jimi Hendrix. Despite the hype, Benoit has done his best over the years to maintain a commitment to his Cajun roots? a goal that often eluded him when past producers and promoters tried to turn him and his recordings in a rock direction, often against his better instincts. These Blues Are All Mine, released on Vanguard in 1999 after Justice folded, marked a return to the rootsy sound that he'd been steered away from for several years.

That same year, he appeared on Homesick for the Road, a collaborative album on the Telarc label with fellow guitarists Kenny Neal and Debbie Davies. Homesick not only served as a showcase for three relatively young but clearly rising stars, but also launched Benoit's relationship with Telarc that came to fruition in 2002 with the release of Wetlands ?arguably the most authentically Cajun installment in his entire ten-year discography.

On Wetlands, Benoit mixes original material like the autobiographical ?When a Cajun Man Gets the Blues? and the driving ?Fast and Free? with little-known classics like Li'l Bob & the Lollipops' ?I Got Loaded,? Professor Longhair's ?Her Mind Is Gone? and Otis Redding's timeless ?These Arms of Mine? (Tab's vocal style has long been influenced by Redding).

That same year, Benoit and Thackery took their dueling guitar show on the road and recorded a March 2003 performance at the Unity Centre for Performing Arts in Unity, Maine. The result was Whiskey Store Live, a high-energy guitar fest released in February 2004.

An interview with Tab Benoit:
http://www.thecelebritycafe.com/interviews/tab_benoit.html

Legacy: The Best Of Tab Benoit

Power of the Pontchartrain

Best Of The Bayou Blues

Brother To The Blues

Voice Of The Wetlands

Fever For The Bayou