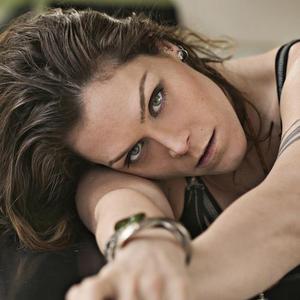 Beth Hart (born January 24, 1972) is an American singer-songwriter who became famous with the hit "LA Song (Out of This Town)", which aired during Episode 17 of the 10th and final season of Beverly Hills, 90210. Her musical influences include rock, blues, gospel, jazz, and classical. While playing the Los Angeles clubs, she enlisted bassist Tal Herzberg and guitarist Jimmy Khoury. In 1993, Hart appeared on Ed McMahon's Star Search several times.

"Beth Hart and the Ocean of Souls" was recorded in 1993. It includes "Am I the One" (re-worked on later album Immortal (1996)) and a pop-rock cover of the Beatles' "Lucy in the Sky with Diamonds."

Hart released her album Immortal with her band Beth Hart Band in 1996.

Her next album, Screamin' for My Supper (Atlantic, 1999), featured "LA Song (Out of This Town)," a top-5 Adult Contemporary Chart hit. At the same time, Hart was singing the lead role in "Love, Janis," an Off-Broadway musical based on Joplin's letters home to her mother.

Hart's Leave the Light On was released in 2003. European releases of the album include extras such as the ballad "Learning to Live" and a duet with Barry Hay, "I Don't Want to Be."

Hart released "Live at Paradiso" in 2005. The DVD version includes a bonus documentary covering "a day in the life" of Hart. She has also recorded with Born ("It Hurts"), Les Paul and Neal Schon ("I Wanna Know You"), and released a number of music video singles not available on CD, including "Shine," "Boogeyman," and "Setting Me Free."

Hart did a song with Slash called "Mother Maria." That song is on the iTunes version of Slash's solo album, Slash.

Beth's new single was released in May 2010, the track, "Learning to Live," is from an upcoming album of the same name and will be used as the theme song to "Losing It with Jillian" on NBC. this album marks Beth's first new American studio release since 2003.

In 2011 she worked with Joe Bonamassa, first providing vocals for the track "No Love On The Street" on his album Dust Bowl (March 2011). They also worked on an entire album of blues classics together, entitled Don't Explain(released on September 27, 2011).

A Tribute To Led Zeppelin

War In My Mind (Deluxe Edition)

Fire On The Floor