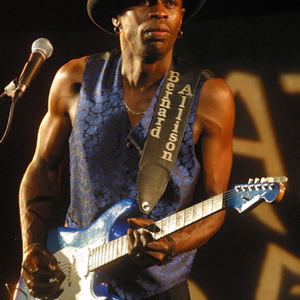 SEE ALSO:http://www.last.fm/music/+noredirect/BERNARD+ALLISON+GROUP ''Bernard Allison is the youngest of nine children. His father is Luther Allison, a famous blues musician. Bernard played the guitar in one of his fathers?s songs at the age of 13. After leaving school he played in a band called "Blues Machine" and later he played for Willie Dixons "Blues All-Stars". He was at several blues Festivals with his father.

In 1989, Allison moved to Paris,where he had several concerts with his father. In the same year they played at the famous Chicago Blues Festival.This can be heard on the album "Let?s try it again" by Luther Allison.
In 1990, Bernards first Solo album was released.
1999,2 years after his father?s death, Bernard returned to the United States.