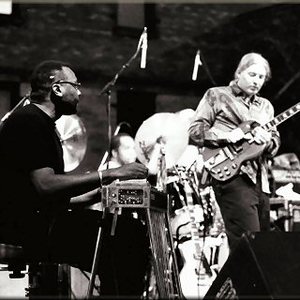 The Derek Trucks Band is a band started by slide guitarist prodigy, Derek Trucks, who began playing guitar and touring with The Allman Brothers Band, as early as eleven years old. Raised partly on tour with them throughout his youth, meeting and playing with famous musicians, Trucks was still unsure about his own future. He resolved to start his own band while still an adolescent. What first began as a side project, and a way for Trucks to explore his own creativity, has evolved into an eclectic band with some of the most talented musicians from the southeastern United States.

Loosely based in his home town of Jacksonville, Florida since 1994-1995, since his mid-teens, the band has drawn upon the wide variety of the influences and tastes of its current band members, and has gained fame for playing blues, southern rock, jazz, indian classical, and a fusion of world music.

Born in Jacksonville, Florida, Derek Trucks took up the guitar at age 9, and it was quickly apparent that he was a child prodigy. He was playing with a band and touring within two years. His early repertoire was heavily blues-based, obviously inspired by The Allman Brothers Band, of which his uncle, drummer Butch Trucks, is a founding member. Older bluesmen like Howlin' Wolf, jazz musicians Miles Davis, Sun Ra, John Coltrane, Charlie Christian and later Wayne Shorter and many others, became an influence for Trucks a few years later. Eastern Music, mainly indian classical, also affected Trucks's musical development, primarily his slide guitar playing, which is often compared to that of Duane Allman but is also heavily influenced by sarod players like Ali Akbar Khan. In 2003, he was the youngest guitarist on Rolling Stone magazine's list of 100 Greatest Guitarists of All-Time, and has been hailed as one of the greatest slide guitarists since Duane Allman.

Trucks formed his first band at age 12, and played his first gigs with them as "Derek and the Dominators". Later, Atlanta's jazz and blues bassist Todd Smallie joined Trucks in 1994, and became the first member of what is now the current version of The Derek Trucks Band. When Trucks really set about assembling a lasting band, he was by his reckoning about 14 years old. Smallie, on bass, was the first to join him. As a result, Trucks feels that he's "kind of grown up with him." A year later in 1995, drummer Yonrico Scott completed the band's early rhythm section. The band released its self-titled debut album, The Derek Trucks Band, in 1997, and followed with Out of The Madness in 1999. Scott has been playing with Trucks for over 16 years as of 2008. According to Derek Trucks: "We've developed a kind of 'musical ESP'.. it's nice to have somebody that you don't have to look at...he's just right there with you."

Kofi Burbridge joined the band shortly thereafter, contributing to the band's sound as a multi-instrumentalist, with his versatility on keyboards, flute, and vocals. Like his brother, whom Trucks plays with in the Allman Brothers Band, bassist Oteil Burbridge, Kofi Burbridge's education was primarily rooted in classical and jazz music. In an interview upon the release of their 2002 album, Joyful Noise, Trucks laughingly commented, "Kofi Burbridge has been with us maybe 2-3 years, and he's one of the few musical geniuses that I've had the chance to work with, he's totally insane"... continuing, "I'm really anxious to see in the next few years to see where he takes this, because he's definitely a huge part of what's going on right now."

In 2002 the band's producers, Craig Street and John Snyder recommended singer Mike Mattison to the band. Mattison performed several shows with the band, and Trucks decided Mattison's soulful voice and calm stage presence completed the band's identity. Trucks said of Mattison, "He's got a huge range, so that helps us out a lot when we stretch into some of the different material we cover. It's like having three different vocalists onstage at times. It's a tough piece of the puzzle to find, you know -- a good singer who fits with what you're doing -- so we were very fortunate to hook up with Mike." Mattison had a previous band as well-- a vocal duo, called Scrapomatic, with Paul Olsen, a guitarist and vocalist, whom he still performs with at occasional gigs, including some opening sets for The Derek Trucks Band. The band's final member, Count M'Butu is the only band member that does not appear on every tour. M'Butu, the group's eldest member, plays a variety of African drums. Trucks mentions casually that he had known M'Butu for many years before he joined the Derek Trucks Band, as M'Butu was a regular musical fixture in Atlanta; one of the bastions of the Allman Brothers fan bases.

Trucks' guitar playing is unusual in a number of respects. He steadfastly avoids processing and effects, preferring to get the purest tone possible by connecting his guitar directly to his amplifier, a 1964 Fender Super Reverb. He modifies his tone with the controls on the guitar. He plays without the use of a plectrum (pick), using his fingers instead, plucking primarily with the thumb, index and middle fingers, but also using the ring finger on occasion. He developed his technique himself. His guitar is always tuned to 'Open E'. From the low to high string, (i.e., EBEG#Be) he slightly detunes his low E string (a technique he and Jimmy Herring developed while playing together). Open E is a normal tuning for slide players, as it allows them to form chords more easily, but over the years he has become a highly acclaimed straight lead player without switching to standard tuning (EADGBe).

As of early 2006, Trucks is an accompanying guitarist in Eric Clapton's 2006-2007 touring band. In early 2006, Trucks lost equipment, as an equipment trailer was stolen. Some of the gear was recovered on May 18, 2006, as reported in the Columbia Records Derek Trucks Forum. Gear that was reported as recovered from a field outside Atlanta, GA includes Derek's "1965 BFSR, the amp he's been playing since he was a young boy; Derek's 1968 SFSR (one of the backup amps),the DTB's Hammond B-3, two Leslies, a Hohner E-7 Clavinet, and a few other minor items."