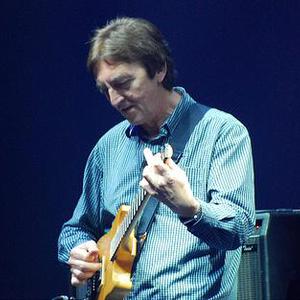 British guitarist Allan Holdsworth (born Aug 6, 1946 in Bradford, Yorkshire, England) occupies a legendary status among many players of his instrument. Most of his work has been in the realm of electric jazz fusion and progressive rock, though he has also dabbled in more straight-ahead rock and jazz. Aside from many solo albums, he has performed with Bill Bruford (both in his band and in UK), Soft Machine, Gong, Tony Williams, Jean-Luc Ponty, and many others.

He is known for his unusual technique, which is filled with unusual chord voicings and legato melodies of great harmonic sophistication. Many guitarists, including Eddie Van Halen, Yngwie Malmsteen and Steve Vai have lauded him as a master. He has also been a pioneer in the use of guitar synthesizers like the Synthaxe which was used extensively on his albums Atavachron and Sand . Holdsworth was also Frank Zappa's favorite guitarist.