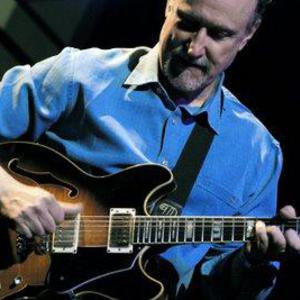 John Scofield (born December 26, 1951 in Dayton, Ohio) is a jazz guitarist and composer, who played and eventually collaborated with Miles Davis. A bebop master, Scofield is simultaneously well acquainted with R&B and blues styles which he mixes seamlessly with his jazz playing. He recorded with Charles Mingus in 1976, and replaced Pat Metheny in Gary Burton's quartet. In autumn 1976 he signed a contract with Enja Records, and he released his first album East Meets West in 1977. In 1979 he formed a trio with Steve Swallow and Adam Nussbaum.

He recorded with Charles Mingus in 1976, and replaced Pat Metheny in Gary Burton's quartet. In autumn 1976 he signed a contract with Enja Records, and he released his first album East Meets West in 1977. In 1979 he formed a trio with Steve Swallow and Adam Nussbaum. He later joined Miles Davis, with whom he remained until 1985.

While still with Davis, he released Electric Outlet (1984). Still Warm (1985) followed after he left Davis's group.

At the beginning of the 1990s, he formed a quartet with Joe Lovano with whom he recorded several important albums for Blue Note Records. Time on My Hands (1990), with Lovano, Charlie Haden and Jack DeJohnette, showcased Scofield's guitar and Mingus-influenced writing. Bill Stewart subsequently became the group's drummer, and played on Meant to Be (1991) and What We Do (1993). In 1992, Scofield released Grace Under Pressure, featuring fellow guitarist Bill Frisell, with Charlie Haden on bass and Joey Baron on drums. Stewart was back in the drum chair for the 1994 collaboration with Pat Metheny, I Can See Your House from Here. Also, in 1997 he recorded "A Go Go" LP, supported by the fame of Medeski, Martin and Wood, truly a masterpiece with range of lounge music and finest funk feel behind the beat.

Towards the end of his tenure with Blue Note, Scofield returned to a more funk- and soul jazz-oriented sound, a direction which has dominated much of his subsequent output. At this time, he also started performing with various jambands, and even performed with DJ Logic to cover Phish's "Cars Trucks Buses", on Sharin' in the Groove (2001).

He released ?berjam in 2002 and Up All Night in 2004, two albums on which he experiments with drum n bass and other modern rhythms. Late 2004 saw the release of En Route, which features the jazz trio of John Scofield, Steve Swallow on bass and Bill Stewart on drums. It was recorded live at The Blue Note, NYC in December 2003.

More recently Scofield has been jamming with the likes of Medeski, Martin and Wood, and has even gone so far as to record an album with them, this time with equal billing, as Medeski Scofield Martin & Wood.

On September 26, 2006 he released Out Louder, his second collaborative effort album with avant garde jazz trio Medeski Martin & Wood.
On September 18, 2007 he released This Meets That, a record featuring his trio with Steve Swallow and Bill Stewart. This time John added a horn section to expand the sound of his trio. The touring unit for this record features the Sco Horns, a three piece horn section of Phil Grenadier on trumpet and flugelhorn, Tom Olin on tenor saxophone, flute and alto flute and Frank Vacin on baritone saxophone and bass clarinet.
Presently, Scofield is a part of the NYU/Steindhart Jazz program in New York City, as a faculty member.