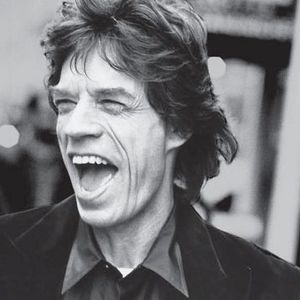 As the lead singer for The Rolling Stones, Mick Jagger is one of the most popular and influential frontman in the history of rock & roll. Jagger fronted the Rolling Stones for over 20 years before he began a solo career in 1985. At the time of the release of his d?but solo album, She's the Boss, it appeared that the Stones may have been approaching the end of their career*, but it soon transpired that Jagger's solo career would run concurrently with that of the band's.

Over the next decade, he released a string of solo albums, none of which achieved the commercial success of the Stones' less popular releases.

Born Michael Phillip Jagger on July 26, 1943, in Dartford, England, he initially met future musical collaborator and Rolling Stones guitarist Keith Richards while the pair were five years old at primary school, although they would lose contact with each other shortly thereafter. In the intervening years, Jagger discovered a love for music, especially early rock & roll (forming a high school band, Little Boy Blue & the Blue Boys), as well as developing an interest in business, attending the London School of Economics.

In 1960 in his late teens, Jagger happened to bump into Richards once again (while the two were waiting on a train platform), and when Richards noticed Jagger had several blues records under his arm, they became friends again and started up the Rolling Stones shortly thereafter. The band (which also included second guitarist Brian Jones, bassist Bill Wyman, and drummer Charlie Watts), merged the rock & roll of Chuck Berry with the raw blues of Muddy Waters, creating a style that would be infinitely copied by others in its wake. By the late '60s, the Rolling Stones were rivaling the Beatles as the world's most popular rock band (with their second guitarist slot rotating from time to time), issuing such classic singles as "Paint It Black," "Time Is on My Side," "Get Off of My Cloud," "(I Can't Get No) Satisfaction," "Jumpin' Jack Flash," and others. In 1968, they began a string of albums that would go down as some of rock's most quintessential and enduring albums ever recorded -- 1968's Beggar's Banquet, 1969's Let It Bleed, 1970's Get Yer Ya-Ya's Out, 1971's Sticky Fingers, and 1972's Exile on Main Street.

During this time, Jagger also tried his hand at acting in movies, landing roles in such flicks as Performance and Ned Kelly (both from 1970). Jagger also became a renowned playboy and jet setter among other celebrities. As a result (as well as the Stones' escalating drug abuse), the quality of the Stones' music began to suffer -- while they remained one of the world's top concert draws and beloved bands, they issued albums of varying quality from the mid-'70s through the early '80s. Around this time, Jagger and Keith Richards conflicted over the musical direction of the band. Jagger wanted to move the band in a more pop and dance-oriented direction while Richards wanted to stay true to the band's rock & roll and blues roots. By 1984, Jagger had begun recording a solo album where he pursued a more mainstream, dance-inflected pop direction. The resulting album, She's the Boss, was released in 1985. Jagger filmed a number of state-of-the-art videos for the album, which all received heavy airplay from MTV, helping propel the record's first single, "Just Another Night," to number 12 and the album to platinum status. "Lucky in Love," the second single from the album scraped the bottom of the Top 40. In the summer of 1985, Jagger and David Bowie recorded a cover of Martha & the Vandellas' "Dancing in the Street" for the Live Aid organization. The single peaked at number seven on the U.S. pop charts; all the proceeds from its sale were donated to Live Aid.

Around the same time the Rolling Stones released their 1986 album, Dirty Work, Jagger released the theme song from the movie Ruthless People as a single and told Richards that the Stones would not tour to support Dirty Work. For the next few years, Jagger and Richards barely spoke to each other and sniped at the other in the press. During this time, Jagger tried to make his solo career as successful as the Rolling Stones, pouring all of his energy into his second solo album, 1987's Primitive Cool. Although the album received stronger reviews than She's the Boss, only one of the singles -- "Let's Work" -- scraped the bottom of the Top 40 and the record didn't go gold.

Following the commercial failure of Primitive Cool, Jagger returned to the fold of the Rolling Stones in 1989, recording, releasing, and touring the Steel Wheels album. Steel Wheels was a massively successful venture and after the tour was completed, the Stones entered a slow period, where each of the members pursued solo projects. Jagger recorded his third solo album with Rick Rubin, who had previously worked with the Beastie Boys and the Red Hot Chili Peppers. The resulting solo album, Wandering Spirit, was released in 1993 and received the strongest reviews of any of Jagger's solo efforts. The album entered the U.S. charts at number 11 and went gold the year it was released. A year after the release of Wandering Spirit, the Stones reunited and released Voodoo Lounge, supporting the album with another extensive international tour. During the '90s, Jagger also resumed his movie acting career, with roles in Freejack (1992), Bent (1997), and The Man From Elysian Fields (2001).

In 1997, the Stones regrouped for another new album, Bridges to Babylon, and a subsequent tour of stadiums worldwide. 2001 saw the release of Jagger's first solo album in nearly ten years, titled Goddess in the Doorway, which included guest appearances from such rock big names as Pete Townshend, Bono, Lenny Kravitz, Missy "Misdemeanor" Elliot, Joe Perry, Wyclef Jean, and Rob Thomas.

In addition to his work with the Rolling Stones and solo releases, Jagger has guested on albums by a wide variety of other artists -- the Jacksons, Peter Tosh, Carly Simon, Dr. John, and Living Colour, among others (the latter he helped discover and produced part of their hit debut album, Vivid). ~ Stephen Thomas Erlewine & Greg Prato, All Music Guide

The Very Best Of Mick Jagger

Goddess In The Doorway