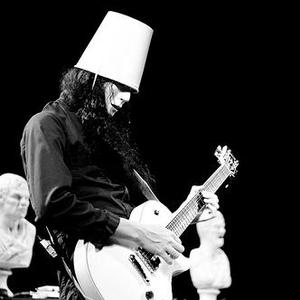 Buckethead is an American musician, songwriter and guitar virtuoso, famed for his distinctive stage outfit and elaborate stage shows. He has released 37 solo albums and performed on over 50 more since 1992. He has also made guest appearances on more than 40 different albums by various artists. His music spans such diverse areas as heavy metal, funk, ambient, jazz, electronic, and avant-garde music.

When performing in his theatrical persona, Buckethead used to wear a KFC bucket (emblazoned with an orange bumper sticker that read ?FUNERAL? in black block letters) on his head and a plain white costume mask (commonly found in costume shops and used primarily for dramatic theater productions). More recently, he has switched to a plain white bucket no longer bearing the KFC logo. He also incorporates nunchaku, robot dancing, and toy trading into his stage performances. Buckethead's persona represents a character who was ?raised by chickens? and has made it his ?mission in life to alert the world to the ongoing chicken holocaust in fast-food joints around the globe.?

Although a multi-instrumentalist, Buckethead is best known for his electric guitar playing. He has been voted number 8 on a list in GuitarOne magazine of the ?Top 20 Greatest Guitar Shredders of All Time.?

Pike 276 - Healing Inside Outside Every Side