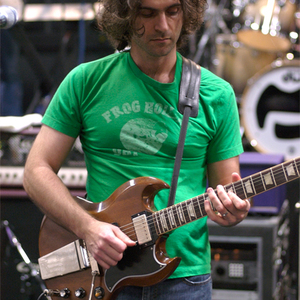 Dweezil Zappa (born September 5, 1969, in Los Angeles, California) is a heavy metal guitarist. He is the son of Gail Sloatman and Frank Zappa and the second of four siblings: his older sister, Moon Unit, and his two younger siblings Ahmet and Diva Zappa. Dweezil's registered birth name was Ian Donald Calvin Euclid Zappa, although this occurred only because the hospital at which he was born refused to register him under the name Dweezil.

Dweezil's registered birth name was Ian Donald Calvin Euclid Zappa, although this occurred only because the hospital at which he was born refused to register him under the name Dweezil. The name was a nickname coined by Frank for an oddly-curled pinky-toe of Gail's. His father instead used the first names of his bandmates to form a name. He was always called "Dweezil" by his family and was unaware that this was not the name on his birth certificate. Upon this discovery at the age of five, he insisted on having his nickname become his legal name. Gail and Frank hired an attorney and soon the name Dweezil was official.

In the 1980s, Dweezil worked as a MTV VJ. He also recorded some solo rock albums, as well as playing guitar for other artists. Dweezil can be seen in the music video for Don Johnson's top 40 song, "Heartbeat." Dweezil has said that Eddie Van Halen was his favorite guitar player, and he began copying Van Halen's distinctive guitar style. He also had a part in the futuristic Arnold Schwarzenegger movie The Running Man as Stevie ("Don't touch that dial!"), and gave his most famous cameo role in Molly Ringwald's brat-pack movie Pretty in Pink as Andi's friend, Simon.

In the mid 1990s, he voiced the character Ajax Duckman on the animated series Duckman. He also briefly appeared in the television sitcom "Normal Life" with sister Moon Unit Zappa and former Laverne and Shirley star Cindy Williams. And he also had a small role in the Michael Keaton movie Jack Frost in 1998, along with his sister Moon Unit Zappa and fellow musician Henry Rollins.

Dweezil's first serious relationship of note was with Katie Wagner, daughter of actor Robert Wagner, star of the Hart to Hart tv show. Dweezil later went on to have a brief relationship with actress Sharon Stone. For six years, Dweezil dated musician Lisa Loeb. Dweezil and Lisa wrote and performed music together, and even went on tour with Loeb's band. The couple co-hosted the cooking show Dweezil & Lisa on Food Network in 2004. However, the couple broke up in the summer of 2004. Dweezil married fashion stylist Lauren Knudsen on September 3, 2005 in Los Angeles.

In 2006, Dweezil organized the "Zappa Plays Zappa" tour. He assembled a band of young musicians with a view to bring the music of Frank Zappa to a younger audience. The tour also features guest appearances by Steve Vai, Napoleon Murphy Brock and Terry Bozzio. The tour began in Europe in May with dates in the U.S. from June. After a break it continued in the U.S. on October 18, 2006.

Go With What You Know

My Guitar Wants To Kill Your Mama