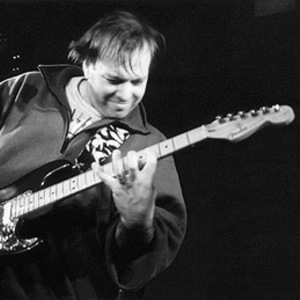 Michael Joseph Keneally (Born December 20, 1961) is an American musician. Born in Long Island, New York, he moved to San Diego, California at an early age and has been a fixture on the local music scene there since 1985 when he formed the local cult band, Drop Control. Although a well established musician in his own right, Keneally is probably most well known as former Frank Zappa "stunt guitarist" and a Zappa 1988 tour band member.

His ascendency to that position is legendary in certain musician circles, based on Keneally's command over the vast and difficult Zappa repertoire. Unfortunately, his stint in the Zappa touring band was short lived with the early cancellation of the 88 tour and Zappa's death in 1993. Keneally moved on from the elder Zappa's band to work with the eldest Zappa son, Dweezil on his solo albums and work released as the band, Z.
Keneally has also released nine albums of solo material since 1992 and has guested or acted as sideman on a wide variety of projects, most notably as part of Steve Vai's touring bands.
He has played guitar and keyboards with Yo Miles!, Wadada Leo Smith and Henry Kaiser's Miles Davis tribute band. He is currently touring as part of the Dethklok live show.

Streaming Radio of all his music
http://www.radiokeneally.com/playing.php?buster=0206242547

You Must Be This Tall

Evidence Of Humanity (With Marco Minnemann)