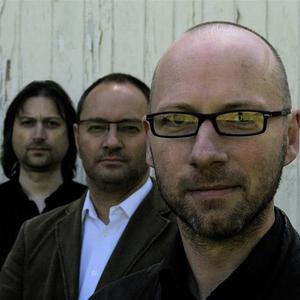 BIG BIG TRAIN is a progressive rock band based in Bournemouth, England. The band currently consists of founder members Andy Poole and Gregory Spawton, vocalist David Longdon, Nick D'Virgilio (drums) and Dave Gregory (guitars). Big Big Train have released six albums including the critically acclaimed The Underfall Yard. Big Big Train was formed in 1990. A demo cassette tape of the band's first songs, recorded on 8-track, was released in October 1991 and was followed by a handful of live performances.

Big Big Train was formed in 1990. A demo cassette tape of the band's first songs, recorded on 8-track, was released in October 1991 and was followed by a handful of live performances. The demo tape 'From the River to the Sea' was re-recorded and released as a self-financed CD in May 1992, following which BBT played some higher profile gigs in England.

In January 1993, a second demo tape, 'The Infant Hercules' was released and the band then spent the next six months writing the music for its first proper album, 'Goodbye to the Age of Steam'. This was recorded in a two week period in July 1993. Soon afterwards, BBT signed to the progressive rock label GEP, where they found themselves as label mates of IQ.

'Goodbye to the Age of Steam' was a big leap forward for the band, both in terms of songwriting and recording quality. The response to the album was very positive, culminating in a licencing deal in Japan where the CD was re-released in 1995, with a bonus track.

In the meantime, Ian Cooper had left the band (for family rather than musical reasons) and live performances were put on hold while a replacement was sought and a new album written.

Recording of the new album commenced in July of 1995 that year (with Greg filling in on keyboards) and continued, sporadically, until completion 18 months later. During the sessions, a new keyboard player, Tony M?ller was recruited. Some of the songs from the new album were debuted at the band's only show from this period at the Astoria, London. 'English Boy Wonders' was finally released in autumn 1997, although in an incomplete state as the band had run out of money to complete the project. English Boy Wonders combined progressive rock (Genesis, Van Der Graaf Generator) with indie-pop influences (XTC, The Cure.)

Steve Hughes left Big Big Train in September 1998 and went on to join THE ENID. He was replaced by Pete Hibbit. After a few more live performances, the band's momentum seemed all but spent and Greg and Andy retreated back to their studio without the rest of the band, to work on some new songs.

In February 2002, after three years of irregular writing and recording, a new album 'Bard' was released. At the same time, the Enid went into hibernation and Steve Hughes rejoined BBT. A new vocalist, Sean Filkins was recruited to replace original vocalist Martin Read and a new CD, 'Gathering Speed', was released in March 2004. Gathering Speed was a concept album which told the story of a fighter pilot in the summer of 1940. It marked a change in direction for BIG BIG TRAIN with the band exploring classic prog-rock territory with the addition of some post-rock influences (Sigur Ros, Mogwai.)

In 2008, Big Big Train re-released English Boy Wonders (an updated and completed version of the album which was partly re-recorded by BBT and fully re-mixed by Rob Aubrey).

In February 2009, songwriter Gregory Spawton announced that Sean Filkins and Steve Hughes had left BBT to be replaced by David Longdon and Nick D'Virgilio.

David Longdon was signed to Rondor Music and recorded for Epic records in the 1990's. His band The Gifthorse supported Kirsty MacColl, Blur and The Pogues amongst others. In the final days of The Gifthorse, Longdon was invited to audition as a potential replacement for Phil Collins as lead singer in Genesis. He worked with Tony Banks, Mike Rutherford and producer Nick Davis from May to November 1996 on recordings that would become the Calling All Stations album. Genesis also worked with Stiltskin vocalist Ray Wilson at the same time and eventually he was preferred over Longdon.

In 2008 Martin Orford (IQ) invited Longdon to sing on his swan-song album The Old Road which was also recorded by Rob Aubrey. Shortly afterwards, Longdon joined Big Big Train in time to commence work on their sixth album, The Underfall Yard, which was released on December 15th 2009. The Underfall Yard is the band's best-selling album and received significant critical acclaim.

In September 2012, the band released the first part of a double album called English Electric. Part two is expected sometime in 2013.

Summer Shall Not Fade CD2

Summer Shall Not Fade CD1

Welcome To The Planet