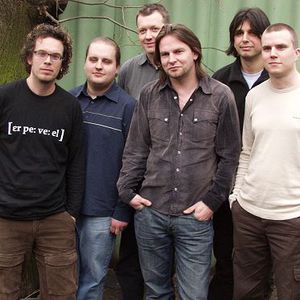 RPWL is a German progressive rock band. Its name was taken from the first letters of the original 4 members: Chris Postl, Phil Paul Rissettio, Yogi Lang, and Karlheinz Wallner. With their debut CD "God Has Failed" in September 2000, RPWL was greeted on all sides with great enthusiasm. Praise and excellent reviews in all the important magazines. A hugely successful tour through half of Europe and appearances at many of the major festivals.

With their debut CD "God Has Failed" in September 2000, RPWL was greeted on all sides with great enthusiasm. Praise and excellent reviews in all the important magazines. A hugely successful tour through half of Europe and appearances at many of the major festivals. In addition, RPWL has become an appreciated part of the Progressive/Symphonic rock scene. In 2000, some of the most important and influential Scene magazines graded the band on the world-wide popularity scale under the TOP 3!

In spring 2002, RPWL released their second album "Trying to Kiss the Sun". What began in 1997 as a Pink Floyd cover band, named Violet District, has in the meantime developed into an effective band in its own right. The music is still typically "RPWL" and without question, belongs to the symphonic rock scene. With a well-thought out collage of sound and tone, haunting melodies and poetic texts that get under the skin and are not easily forgotten, together with a brit-pop rock mood - RPWL has made significant steps towards their own style of music with this second album. Whether enjoyed live or on CD, the songs sometimes sound a little raw but in that they have a very sensitive and personal tone, are not only a pleasure to listen to but at times can raise the hair on your head!

Backed-up by a unique Quadrophonic-System, every concert becomes a very special experience! There were numerous opportunities to experience RPWL live at stage: The Band went on tour through out Germany and half of Europe.

Meanwhile RPWL has won their fans' favour world-wide. So it's not surprising that, in July 2002, "Trying to Kiss the Sun" was released in the USA as well. In December 2001 the Brazilian people have already released the "God Has Failed" album.

Motivated by their latest success the band has released a very special album (in Germany and in the USA): "STOCK - A collection of previously unreleased material". Additionally for all hi-fi fans they have mixed the "STOCK" songs in the most modern way of listening to music: 5.1 Surround-Sound. Obviously it has suggested itself to transmit the Quadrophonic-Sound from concert stage to the people's familiar living-room. So the "STOCK" album is published as a digi-pack with one conventional CD and one DVD with the surround mix (Dolby/DTS) plus a tour- and history-video of RPWL. The release of "STOCK" was on 10th February 2003 (Europe and USA). The press has payed a great tribute to this album therefore the following tour through Europe, started on 13th March 2003, has been entirely successful. In 2003, as a very honour to RPWL, they had got the chance to support the very popular band Toto at the "Tollwood-Festival" in Munich.

In 2005 the band released the album "World Through My Eyes", also available as special-edition Hybrid-SACD 5.1 mix. One track on it ("Roses") features the impressive voice of ex-Genesis/ex-Stiltskin-singer Ray Wilson on lead-vocals.

Later that year, the band released their 1st live album "Live: Start the Fire", known to fans of the group as just "Start The Fire". The double disc album contains the whole of the band's Rockplast concert, again featuring Ray Wilson on lead vocals for Roses and one other track this time, Not About Us. Ray recorded this song with Genesis in 1997 for the Calling All Stations album. This was a way for the band to pay tribute to the other main band that has influenced them greatly, Genesis.

On 9/9/2007, RPWL released the album "9". It is a compilation including 5 previously unreleased live songs and 4 brand new solo songs from Yogi Lang, Chris Postl, Manni M?ller and Kalle Wallner, recorded together by the band. Those studio-tracks are representing the different influences in the band. "9" was released in a limited edition of 999 CDs and is only available from their website.

In 2008 they released the album"The RPWL Experience".
The band's official website is www.rpwl.de.

Plays Pink Floyd's 'the Man And The Journey'

A Show Beyond Man And Time (Live) CD2