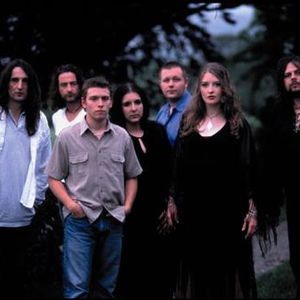 Mostly Autumn are a rock band from York, UK. Their music contains elements of progressive rock, hard rock, folk-rock and celtic rock, and has included flute, violin, whistles and Uilleann pipes alongside traditional rock instruments. Their music has changed and evolved over the years although much of their work retains a strong 70s classic rock feel. The band was formed in 1997 by guitarist and vocalist Bryan Josh and has undergone a great many lineup changes over the band's history, too many to list in full.

The band was formed in 1997 by guitarist and vocalist Bryan Josh and has undergone a great many lineup changes over the band's history, too many to list in full. The earliest lineup of the band featured Heidi Widdop on lead vocals, but by the time they recorded their debut album For All We Shared in 1998 for Cyclops Records she had been replaced by Heather Findlay. The album features an eight-piece band including Iain Jennings on keyboards, Liam Davidson on rhythm and slide guitars, and Bob Faulds on violin. Angela Gordon appears as a guest musician, although she was subsequently to to join the band as a full-time member. Two further albums followed on Cyclops, The Spirit of Autumn Past (1999) and The Last Bright Light (2001). By the time of latter Bob Faulds had left the band, but they had been joined by current bassist Andy Smith. These early albums had a strong folk-rock and celtic rock flavour, with instrumental jigs sitting alongside atmospheric epics influenced strongly by the likes of Pink Floyd. The third album in particular remains a favourite with many fans, and recent live sets still drawn heavily from it.

The band then signed to Classic Rock Legends. The first release for this label, the largely instrumental Music Inspired by Lord of the Rings (2001) was not generally considered to their proper fourth album, that honour falling to Passengers (2003). This album marked a change in direction, to a polished melodic rock sound with the celtic and folk-rock elements much reduced, a direction continued with the follow-up Storms Over Still Water. They also released a number of live albums during this period, as well as the retrospective album Catch the Spirit, made up of re-recorded songs largely from from the three Cyclops albums.

2006 saw the band leave Classic Rock Legends to self-release albums funded by fan pre-orders, a business model pioneered by Marillion, and also saw the departure of founder member and significant songwriter Iain Jennings to focus on Breathing Space, to be replaced by multi-instumentalist Chris Johnson. Their first self-released album Heart Full Of Sky was an eclectic mix of musical styles, and received a mixed reception from some fans. Conflicting commitments with other bands and a desire to work on a solo project (which ultimately became Parade) saw Chris Johnson leave at the end of 2007. 2008's Glass Shadows saw the band reduced to a core creative duo of Bryan and Heather, and the following tour saw another major shakeup of the lineup, seeing the departure of Angela Gordon, replaced on flute and keyboards by Anne-Marie Helder, and the return of Iain Jennings and Liam Davidson (who's left a year earlier). although neither Iain or Liam had played on the album.

At the beginning of 2010 Heather Findlay announced her departure from the band to pursue a solo career. Her final live performance with the band on 2nd April 2010 was filmed for a DVD release, released as "That Night in Leamington".

Heather's replacement is Olivia Sparnenn, who had sung backing vocals with the band since 2005 as well as fronting Breathing Space, and the band made their first live appearance with Olivia singing lead in April 2010. Their ninth studio album titled "Go Well Diamond Heart" featuring Olivia on lead vocals, again funded by fan pre-order, was released in November 2010.

In 2011 the band released another live album, Still Beautiful recorded on the spring tour. The band's tenth studio album The Ghost Moon Orchestra, is due for release in summer 2012.