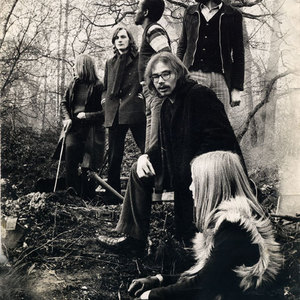 Taking their name from a character in a John Milton masque, Comus is a folk rock band from Beckenham, UK that mixes elements of progressive rock with the influences of The Pentangle, Fairport Convention and other more traditional folk outfits. The band broke up shortly after releasing their first album, 'First Utterance' (1971), due to its failure commercially. Some of the original members later re-convened for their second album, 'To Keep From Crying' (1974). Once again commercial success eluded the group, and they disbanded.

?First Utterance' was re-released in the UK in 1995. Other releases followed in Italy and Japan, culminating in the release of a 2 CD compilation in 2005, featuring everything that Comus had ever recorded in the early 1970's.

Comus reunited in the late-2000s and played several shows, starting with the Swedish Mellotronen Festival in March 2008. A DVD of that performance was released in 2011, and in 2012 they released their third album, aptly named 'Out of the Coma', on Rise Above Records.

Out Of The Coma

East Of Sweden: Live At The Melloboat Festival

To Keep From Crying