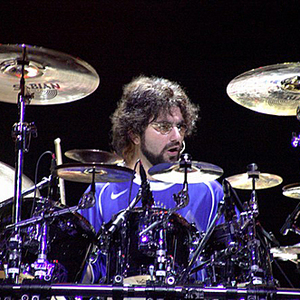 Michael Stephen Portnoy (born April 20, 1967) American drummer primarily known as the former drummer and backing vocalist for the progressive metal band Dream Theater. Known for his drumming prowess, Portnoy has won 23 awards from the Modern Drummer magazine. He has co-produced the last six Dream Theater albums with John Petrucci, starting from Metropolis Pt. 2: Scenes from a Memory. From A Change of Seasons onwards, Portnoy has been writing a substantial amount of Dream Theater's lyrics, filling the void left by Kevin Moore, who left the band after the release of Awake.

He is the second youngest person (after Neil Peart) to be inducted into the Modern Drummer's Hall of Fame (at 37 years of age).

Mike Portnoy was born and raised in Long Beach, New York, on Long Island. According to a post made by Jordan Rudess on his forum, Mike is Jewish but does not practice Judaism as a religion. His father worked as a DJ at a local radio station, helping Portnoy gain an appreciation for music at an early age through bands like Queen, Led Zeppelin, The Who, Yes and The Beatles. Although Portnoy taught himself how to play the drums, he did take music theory classes in high school. During that period he began playing in local bands Intruder, Rising Power and Inner Sanctum, the last two of which released an album. He left Inner Sanctum after being awarded a scholarship to attend Berklee College of Music in Boston. There he met John Petrucci and John Myung with whom he formed the band (originally called Majesty) that would become Dream Theater.

Portnoy has won 23 awards from Modern Drummer magazine, including "Best Up & Coming Talent" (one time), "Best Clinician" (two times), "Best Educational Video/DVD" (two times), "Best recorded performance" (6 times) and "Best Progressive Rock Drummer" (for 12 consecutive years), and is also the second youngest person (at 37 years of age) to be inducted into the Rock Drummer Hall of Fame since Neil Peart was inducted in 1983 (at 31 years of age).

He has released three instructional videos, "Progressive Drum Concepts", "Liquid Drum Theater", which has won awards from Modern Drummer Magazine, and his latest "In Constant Motion". He has also released many "Official Bootlegs" on his website, including footage of the studio sessions for the Dream Theater albums Six Degrees of Inner Turbulence, Train of Thought, Octavarium and the Transatlantic release Bridge Across Forever. He has also released bootlegs of his tribute bands Hammer of the Gods (a Led Zeppelin tribute), Yellow Matter Custard (The Beatles), Cygnus and his Sea Monsters (Rush), and Amazing Journey (The Who).

He also played with New Jersey thrash metal band Overkill for one show in 2004.

On September 18, 2006 within his website's Forum Portnoy cagily stated that he had finally met Rush drummer Neil Peart (one of the few heroes from his youth Portnoy had never met, owing to Peart's legendary privacy), that "Neil and I have finally met and we spent some time together this week and had a great time..." [1], and that a possible collaboration was underway/had been discussed with the teasing statement of "Patience everybody... all will soon be revealed!" It has now been revealed that this meeting was for an interview Portnoy did for his stint as guest editor of Rhythm Magazine.[2] Portnoy had previously written the liner notes for the Japanese pressing of Rush's 2002 release Vapor Trails [3], but also publicly denounced Peart in 2000 after Peart called the people involved in the Rush tribute "bar bands". [4] It was later determined that it was a misunderstanding, as Peart was actually referring to a specific Rush tribute record (that Mike Portnoy had no involvement in).

In February, 2007, Mike Portnoy announced his new DVD "In Constant Motion" would be