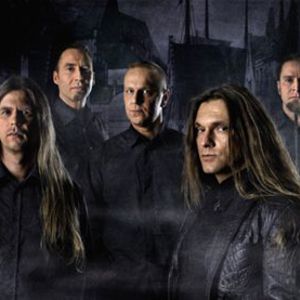 Vanden Plas is a German progressive metal band, based in Kaiserslautern and founded in 1986. The band surrounding vocalist Andreas Kuntz have succeeded in making a name for themselves on an international level, enjoy almost cult status in France, have been touring all over Europe with established acts like Dream Theater, Savatage or Angra and can point to a number of impressive releases, among them three studio albums, a live cut, an unplugged recording, and several EPs.

Since the late Eighties, when the band first got together, Vanden Plas never lost sight of their ambitious goal: expressive music with emotional depth and a melancholy prog metal corset. Starting off with their debut album Colour Temple (1994), the band continued to gather an ever-increasing following with their versatile, intuitive and always unbridled lust for playing. Two years later, in 1997, Vanden Plas brought out their epic bombast successor The God Thing, which was praised by renowned magazines like Metal Hammer, Rock Hard, Burrn!, Aardschock and Flash. A six week tour with Dream Theater followed, like a sort of knighthood conferred on the highest level. The group went on to bring out the unplugged EP AcCult, on which the fascinating aspects of their compositions came to fruition in all their purity. Each Vanden Plas release shows the great musical diversity of the five band members, who have all repeatedly been involved in theatre projects and rock musicals like 'Jesus Christ Superstar', 'The Rocky Horror Picture Show', 'Little Shop of Horrors' or 'Evita'. In September 1999, Vanden Plas returned to the limelight with Far Off Grace, which had been recorded by Pink Cream 69 bassist/producer Dennis Ward at the House Of Audio. The band presented themselves in an even more compact and determined style, remaining melodic and innovative at the same time.

Spring 2000 saw Vanden Plas recording a concert in front of enthusiastic fans at the Elys?e Montmartre in Paris, releasing the cuts on their Spirit of Live album, which also featured a duet by vocalist Andy Kuntz and Don Dokken on the Dokken cover 'Kiss Of Death', and a breathtaking duel between guitarist Stephan Lill and his French colleague Patrick Rondat - over 73 minutes of intense live atmosphere which speak of the band's unbridled enthusiasm for their music. The same enthusiasm comes across on Beyond Daylight, combined with a determination to link past, present and future.

Abydos, a rock opera by Andy Kuntz and Andreas Lill among others.

Missa Mercuria, a metal opera by Stephan Lill, G?nter Werno and DC Cooper (DC Cooper, Silent Force among others), among others, released in 2003.

***
Note that "Vanden Plas" are different to "The Vanden Plas" which is a British electronic act.