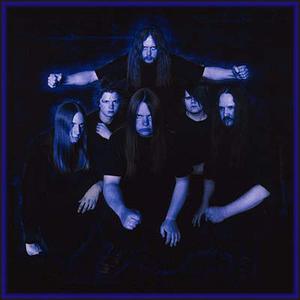 CRYONIC TEMPLE can already look back on an eventful career. The heart of the band is singer Glen Metal, whose voice sounds very similar to that of Steve Grimmet (Grim Reaper), and guitarist Esa "Freewheeler" Ahonen (Acrope), whose traditional way of playing his instrument is marked by the drive of a K.K. Downing and the virtuosity of an Uli Jon Roth. Glen and Esa left their previous combos, an Iron Maiden cover-band named Troopers and LEX CREDO, a prog metal outfit, in 1996, in order to put together something more professional.

Glen and Esa left their previous combos, an Iron Maiden cover-band named Troopers and LEX CREDO, a prog metal outfit, in 1996, in order to put together something more professional.
The name CRYONIC TEMPLE was thought up by Johan and Esa, after watching a documentation about Cryo-Technology, which permits its pro-science followers to have their bodies frozen after death in order to be revived in the far future.


Having quickly fellow musicians for their quest, the first attempt was a mixture of progressive (Rush, Queensryche, Marillion) and atmospheric sounds (Tiamat, Mission), but after several line-up changes, they decided to let the heavy metal beast out of its cage at last. "Seasons In Hell" was the title of their first 4-track demo which appeared in 1997 and from which three titles were also taken for the "Nerve" Compilation CD.


Amongst other places, this CD also fell into the hands of a certain Fred Estby, the drummer of Dismember. Fred Estby followed it up and in 1998 he produced the band's next demo "Before The End" at Hardbow Productions, the company he was the head engineer for, and sent the result to as many labels as he could find. Although numerous interesting offers from various companies arrived, they did not quite reach the expectations of CRYONIC TEMPLE.


Instead of worrying about contracts, the band - which now included guitarist Leif Collin and the keyboarder Janne S?derlund - now concentrated on writing new songs and followed them up by a series of very exciting and successful live performances. These songs were also included on the demo "Warsong" in 2000.


On a sidenote the band won the semifinal of Swedens most important talentshow and made it to the final. They also entered the Top Ten charts of mp3.com with their song "The Gatekeeper".
Suddenly CRYONIC TEMPLE were the centre of attention for numerous record companies and in 2001 they decided to sign a contract with Underground Symphony Records.
Jan J Cederlund (bass) and Sebastian "Zeb O" Olsson (drums) completed the line-up, before releasing "Chapter I" in May 2002 and playing a great set at the Sweden Rock Festival in summer of the same year.
After having provided their first label with the highest selling album in 2002, CRYONIC TEMPLE caused barometers in Sweden to display "Storm" warnings. In order to have the best possible conditions for their second album, "Blood, Guts & Glory" the band signed a contract with Limb Music Products. As they had for their debut, they again worked together with Pelle Saether (Underground Studios) as producer and the result speaks for itself.

Into The Glorious Battle