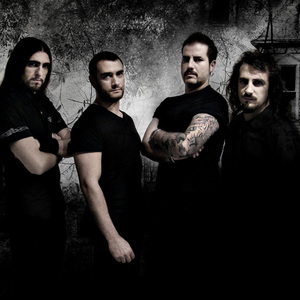 It was during the complicated crisis of the early ?90s, in 1993, when Dark Moor was born under Enrik Garc?a's hand, in Madrid, Spain. In 1999, Dark Moor achieved its first contract. It was the right moment to record the first album of the band, ?Shadowland?, thanks to the interest of Arise Records, which made them loyal to this label to launch their subsequent works. The record got better results than expected, reaching the point of being editorialized in Central Europe and Brazil; this opened the doors to a memorable Spanish tour with Demons & Wizards.

In August 2000 the band recorded their formal international debut, ?The Hall of the Olden Dreams?, and also started a faithful relationship with its producer Luigi Stefanini, who was behind most of their subsequent projects.

The next tour included with great success festivals like Vi?a Rock and Mijas Rock. The band received critical acclaim and also took part in the tribute album to Helloween, named ?The Keepers of Jericho?. They recorded ?Halloween?, a cover that brought the band respect and recognition from half of the world. This song would also be included in the EP ?The Fall of Melnibon?? for Spain.

In November 2001, Dark Moor recorded their third studio album, "The Gates of Oblivion, again under Stefanini's command. The new creation meant another step in the growth of the group; it was edited in new countries like USA and Canada, and garnered a deal with JVC Multinational for the distribution of the album in the Asian market.

In August 2002, Dark Moor again went into the studio in Madrid to record four acoustic songs which were included in the EP ?Between Light and Darkness?.

After this EP a change occurred that would be fundamental for the new sound of Dark Moor and for its definitive international renown: the entry of Alfred Romero as the new lead singer. Alfred gave his personality and unique voice and they all traveled to Italy one more time in order to record ?Dark Moor?, the fourth full-length album of the band. The rawer sound achieved a touch of international quality thanks to the contribution of Alfred's special voice.

They followed this with an international tour, conquering Spain, Belgium and France with After Forever. The band also made a tour around Spain and participated in a few festivals, emphasizing their performance in Vi?a Rock, where thousands of people had the chance of watching them.

They went on to record their fifth album, ?Beyond the Sea?, which saw light in early 2005. With this album, Dark Moor also made their first video clip of the single ?Before the Duel?, starting after their usual Spanish tour and playing in several festivals in Spain, Italy, France and Switzerland.

The band then took part in the tribute album to Ozzy Osbourne ?Tribute to a Madman? edited in Spain with the participation of some of the best bands in the country. Dark Moor's contribution was a cover of ?Mr. Crowley? which they had long since included in their shows. Alfred and Enrik were then invited to participate on Vi?a Rock Festival in a performance that gathered most of the participants of this tribute.

In this important moment they received bad news, their label Arise Records announced their dissolution. In summer 2006, between negotiations for the future, the recordings of their sixth work started. For this new record, named ?Tarot? they inducted a new drummer to the band, Roberto Cappa. Another collaboration followed with Manda Ophuis (Nemesea) and the choir Sincopa 8.

With the new album, Dark Moor soon got a new label for Europe and America: Scarlet Records. They also get a deal with Avalon Marquee for the distribution of the CD in the Asian Market. Dark Moor recorded the video for the new single, called ?The Chariot?.
Soon after being released, ?Tarot? received the best reviews of the band's history, being considered best album of the month by Metal Hammer (Spain), Powerplay (UK), Metalreviews (USA), Heavyowl (Germany) and best album of the year by Heavylaw (France).

The band toured all around Spain to introduce the new album, and from this tour a new cut was born: ?Wheel of Fortune?, mixing live sound with studio sound.

Thanks to the great impact caused by ?Tarot?, the band traveled to South America for the first time, performing in Chile, Peru and Brazil. This marked the first Spanish band performance on Brazilian stages.

In August 2008, Dark Moor came back to Italy with their producer Luigi Stefanini, in order to record their seventh full-length album, "Autumnal."