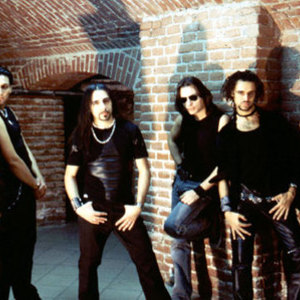 Secret Sphere are a power metal band from Alessandria, Italy. They are often compared to countrymen Rhapsody in their use of symphonic keyboards, ballads, and general feeling. However, the band's first CD, Mistress Of The Shadowlight, has a much rawer sound compared to Rhapsody. The band was formed in 1997 from the talented guitar player Aldo Lonobile and has released six full-lengths. They released a sixth full-length cd in 2010 called Archetype. From the official website :

SECRET SPHERE ? a name guaranteed to make every Power Metal freak's heart beat faster with excitement and anticipation! Crediting bands like HELLOWEEN, ANGRA, DREAM THEATER and SAVATAGE as their biggest influences, SECRET SPHERE manage to honour the heritage of such big names while creating their very own brand of Symphonic Power Metal. SECRET SPHERE was founded in summer 1997, the initial spark coming from the talented guitarist Aldo Lonobile. After some line-up changes during the early days, the current line-up recorded their debut album ?Mistress Of The Shadowlight? in 1999 through Elevate Records. In 2000 SECRET SPHERE appeared on the prestigious ?Keepers Of Jericho? ? HELLOWEEN ? Tribute sampler alongside big names such as SONATA ARCTICA and RHAPSODY. After the second album, ?A Time Nevercome? (2001), SECRET SPHERE concentrated on touring all over Europe and signed with Nuclear Blast for 2003..s opus, ?Scent Of Human Desire?. Produced by Achim K?hler (SINNER, PRIMAL FEAR), their third album reaped excellent reviews and high rankings in international metal press. 2003 saw them play various shows at well-known festivals including the Metal Dayz in Switzerland and the band was also invited to play the ProgPower USA festival in 2004. ?Heart & Anger?, SECRET SPHERE..S second release for Nuclear Blast ? and their 4th, both showed their trademark strengths and the tendency to include even more majestic and orchestral elements and very aggressive parts. Achim K?hler / House Of Music ? well-known for his heavy productions for SINNER, BRAINSTORM or PRIMAL FEAR ? was responsible for the powerful yet detailed production once again. His duty was to melt SECRET SPHERE..S Speed / Power Metal riffing with the epic, symphonic parts recorded with a full orchestra. In 2005, Secret Sphere teamed up with Intromental Management to further the possibilities for the band in the heavy metal business. A tour was booked, as support band for Royal Hunt, but RH chose to cancel the tour 2 days into the schedule, leaving Secret Sphere with a devastated economy and a horrible experience. However, the band decided to fight on in spite of being this terrible incident. With a newfound energy the band after few months, in april 2006 was again on the road supporting King Diamond on his Scandinavian tour. After the succuessfull tour, the band decided to begin working on a new album, this time, including a concept of the strange and moody world of Tim Burton (Edward Scissorhands, A Nightmare Before Christmas, etc.). Moreover, the band played stunning shows at several festivals, including ProgPower UK and the Evolution Fest in Italy. 2007 has been spent, writing material for the new opus, and Secret Sphere is ready for the recordings of the album that will bring them on top of the mountain that is heavy metal. Before to release the fifth album the band decided to come back on the road supporting the Swedish Hard Rockers Astral Doors on their European tour just to build up more the band's name. Now everything is ready for the comeback ! ?Sweet Blood Theory? is the final step to establish the band's trademark in the metal music. A concept album based on the Polidory's novel ?The Vampire? (1814) here and there melted in the typical Tim Burton's moody world and the dark-epic Elfman Soundtracks. Musically the band showing an aggressiveness not usual for a power metal band keeping the unmistakeable style of the band in composing catchy melodies! Secret Sphere now has their unique sound !

The Nature Of Time

One Night In Tokyo CD2

One Night In Tokyo CD1

Portrait Of A Dying Heart