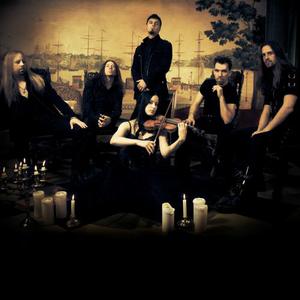 While the Kamelot from Tampa is the most prominent band of this name, there are more bands using it in the world: 1) Kamelot is a power metal band from Tampa, Florida that incorporates progressive and symphonic elements into their music. The band was founded by guitarist Thomas Youngblood and drummer Richard Warner in 1991. In 1994 the band signed a deal with Noise Records; the release of their debut album Eternity followed in 1995. The next album, Dominion, was released in 1997.

1) Kamelot is a power metal band from Tampa, Florida that incorporates progressive and symphonic elements into their music. The band was founded by guitarist Thomas Youngblood and drummer Richard Warner in 1991.

In 1994 the band signed a deal with Noise Records; the release of their debut album Eternity followed in 1995. The next album, Dominion, was released in 1997.

Later that year, two of the band's members were replaced; drummer and founder Richard Warner and lead vocalist Mark Vanderbilt. Respectively, their replacements were Casey Grillo and Roy Khan (Roy S?tre ?Khan? Khantatat from Elverum in Norway - formerly of Conception). With the two new members, Kamelot released their third studio album, Siege Perilous. The new line-up undertook an extensive tour through Europe during the fall of the same year only to return to the Gate Studio in Wolfsburg twelve months later to produce the fourth studio effort The Fourth Legacy.

The summer of 2000 brought the "New Allegiance Tour" through Germany, Austria, Switzerland, The Netherlands, Belgium, Italy, Greece and Spain during which the recordings for Kamelot's first live album The Expedition were made. Only a few months later the band presented their fifth album entitled Karma, to the greatest critical success yet. Their sixth album, Epica was released in 2003. Both Epica and the band's seventh effort, The Black Halo, which was released in 2005, are based on Johann Wolfgang von Goethe's version of the legend of Faust, a man who sells his soul to the devil. To support the new album the band went on tour through Europe and Japan during the first leg of the "Black Halo World Tour 2005", they played a head liner show with Epica and Kotipelto. In Japan the support was Silent Force. They also played on the Bang Your Head!!! Festival in Germany and the Graspop Metal Meeting in Belgium.

In 2005 they shot their first music videos ever, for the songs The Haunting (Somewhere In Time) and March Of Mephisto from the album The Black Halo. Both videos were shot by acclaimed director Patric Ullaeus. The 5th of October 2005 saw the addition of Oliver Palotai as the fifth official band member. Oliver will handle both keyboards and (additional) guitars.

On the second leg of the "Black Halo World Tour" they visited North and South America (USA, Canada, Brazil) as well as Europe (The Netherlands, Belgium, Sweden and Norway). During this part of the tour the bands first live DVD was shot, with the main concert being shot on February 11th, 2006 at Rockefeller Music Hall in Oslo, Norway. The shoot was again handled by Patric Ullaeus. The DVD (and live CD) called One cold winter's night was released in November 2006.

Ghost Opera is the eighth studio album from Kamelot. It was released on June 1st, 2007 via SPV/Steamhammer Records, in Germany and then followed by releases on the fourth and fifth in Europe and the USA, respectively. The album was recorded and mixed at Gate Studios and Pathway Studios in Wolfsburg, Germany with producers Sascha Paeth and Miro. The first video from the album is for the track Ghost Opera, and can be seen on the band's official MySpace site. A video for the song The Human Stain was shot and released later.

Following this was their ninth studio album, Poetry for the Poisoned. It was released on the earMUSIC label, a subdivision of Edel, on September 10, 2010 in Europe, and four days later in North America by the band's own label, KMG Recordings. The release sees the return of founding member Sean Tibbetts (who formerly used the stage name Sean Christians) on bass guitar. A video was recorded for the song "The Great Pandemonium" and released on the band's official YouTube channel on September 6 (it's also included on the Special Edition DVD release of the album). Simone Simons returns to supply guest vocals on a few songs. Amanda Somerville, Gus G. and Bj?rn "Speed" Strid are also featured.

On April 22, Roy Khan decided to leave Kamelot due to his burnout and religious reasons.

On June 22 2012, it was announced that Tommy Karevik from Seventh Wonder would replace Roy Khan as the new vocalist.

2) Kamelot is a czech folk/rock band from Brno found in 1982. The only member who has been in the band the whole time is its founder, Roman Hork?.

Poetry for the Poisoned