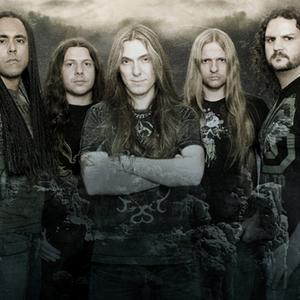 Almah are a Brazilian metal band. It was initially established in 2006 as a side project of former Angra's singer Edu Falaschi. Since 2006 Almah has released three albums and has turned from a solo-project into a band with regular activities. The band released its third album entitled "Motion" in October 2011. "Motion" was recorded at Norcal Studios in S?o Paulo, Brazil between May and June 2011. The album was mixed and mastered by Jochem Jacobs at Split Second Sound Studios in Amsterdam in July 2011.

The first self-titled Almah was released in the second half of 2006 (Japan/Victor-JVC and Brazil/Laser Company) / in March 2007 (Europe/AFM Records). Besides singing, Edu Falaschi also produced the record, composed all the songs and wrote all the lyrics. He recorded acoustic guitars and keyboards and created all the arrangements for every instrument, including orchestrations. The album was recorded in Finland and Brazil with the following musicians: Emppu Vuorinen (guitars ? Nightwish), Lauri Porra (bass ? Stratovarius) and Casey Grillo (drums ? Kamelot) and special guest appearances: Mike Stone (guitars ? Queensr?che), Edu Ardanuy (guitars ? Dr. Sin) and Siz?o Machado (bass ? Tom Jobim, Chico Buarque and others) among others.

Edu Falaschi about the name "Almah" : I was searching for a name ? easy name to remember and to pronounce in all languages and I find out that Almah with ?h? in Hebrew means virginity and purity but at the same time I find out in the bible many religious people say what it means the opposite it means malice and perversion then I thought ? ok two opposite meanings it's very interesting and this two sides I can use this idea to make lyrics ? I decided to talk about human feelings in a whole album - and human feelings can be good and bad ? like liberty like love ore we can feel like freedom we can feel envy and greed ? bad feelings. That's how I decided to wrote about human feelings. But about the name again ? Almah, the sound ?Alma? in Portuguese is soul and the soul in Spanish is soul as well and I am always finding different meanings of this word ? always good meanings.

The debut album got good reviews in many rock magazines and websites worldwide.Edu Falaschi was called one of the best singers by Burrn! magazine readers (Japan).

The second album Fragile Equality was released on September 24 in Asia/Brazil by JVC and Laser Company Records and on October 17 in Europe/USA/Canada by AFM Records. Since in June 2007 Angra took a break for two years, Edu concentrated on Almah. The solo project month by month was turning into a real band with stable line-up.

Edu Falaschi: Angra really stopped in 2007 in July. And then when I released the first album, it was the solo album, I knew that maybe in the future Almah could be a band. And when Angra really stopped, we didn't know about Angra future and we didn't know when we would come back with Angra. I decided in December 2007 to create a new Almah album, but as a real band, as a full time band.

Besides Edu, who is handling the vocals, his Angra's mate Felipe Andreoli on bass has participated in the band. Guitar player Marcelo Barbosa from Khallice joined the band before its first tour in August 2007. During pre-production stage of Fragile Equality the drummer Marcelo Moreira (Burning in Hell) and the second guitarist Paulo Schroeber entered Almah.All members have contributed actively to the songwriting process of Fragile Equality, with Edu Falaschi and Felipe Andreoli being responsible for the production as well. CD was recorded in Norcal Studios (S?o Paulo) in the summer 2008.

The 2nd Almah album Fragile Equality lyrical concept is about "the balance between all the elements of the universe" based on a book that Edu is the co-writer for. The book "Fragile Equality - Equinox-Book 1" (done in manga style) is to be released sometime later, with a karaoke CD of the Fragile Equality album.

In Brazil the first press of the album was sold out during the first day of official sales. According to the magazine Roadie Crew the album became of the best-selling albums in Brazil. By the readers of Brazilian Metal Magazine, Roadie Crew and by the contributors of the Brazilian metal website Whiplash and the Brazilian metal website Rock Undeground Almah and Fragile Equality were recognized as THE BEST BRAZILIAN BAND 2008, THE BEST ALBUM 2008, THE BEST ARTWORK 2008 among other nominations awarded to Almah musicians.

The tour started in S?o Paulo in November 2008 and finished in April 2009 in Rio de Janeiro. In July and August 2008 ALMAH played on the main stage of musical festivals P?AUI POP and POR?O DO ROCK.

In January 2009 Almah launched the new video clip Beyond Tomorrow. It was filmed in December 2008 in the capital of Brazil - Bras?lia by Rodrigo Gianetto who works also for MTV Brazil. The clip is available on the band's official Myspace and Youtube channels.

The band has its own fan clubs all around the world, in Europe, Japan and even in Russia and in Brazil.In March 2009 the band released its first Internet single All I Am (with acoustic version of this song) through its Brazilian Equality Fan Club.

Angra returned to the high activities in March 2009 but Almah announced the start of composing songs for the follower of Fragile Equality.

In October 2011, Paulo Schroeber left the band due to health issues. He played his last show within the band in July 2011.

In September 2011, Edu Falaschi and Felipe Andreoli went to Japan to promote the album release by making various interviews for the local press.

The band also played a few concerts with Sepultura in late 2011.

In April 2012, the band played at the "Metal Open Air" festival in S?o Lu?s. This was the first concert of the new guitarist Gustavo Di Padua replacing Paulo Schroeber.

Lead singer Edu Falaschi recently said that he have 20 new songs for an upcoming Almah album, to be released in 2013.

The band is seeking for a new bass player and have plans to record a show for a future live DVD.

Within The Last Eleven Lines