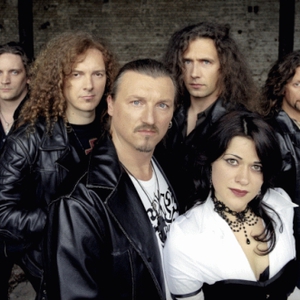 In 1988 after sending in only one demo song AXXIS were signed to EMI Electrola. The debut album "Kingdom of the Night", 1989 which was already released in Europe, Canada, Japan, Australia and the USA sold 100 000 copies immediately. It became the best selling debut album by a Hard Rock band in Germany in 1989. "Axxis II" marked a similar huge success in 1990, followed by the authentic and energetic live release "Access All Areas" a year later. The ambitious "The Big Thrill" became a best seller in 1993.

This album was a big turning point in the career of this five-piece band. Produced by Joey Balin and recorded in Philadelphia, it was the first international production by AXXIS.


In the following years AXXIS had traveled thousands of miles. One if the most impressive destinations was Japan, where Bernhard Weiss and guitarist Walter Pietsch performed a couple of acoustic live shows due to the release of the Japanese only CD "Profile". The band became known worldwide!

The album "Matters Of Survival" was produced in Los Angeles in 1995, the city of angels which is uncritically praised as a Metal capitol by some, a city where glamor, violence and homelessness live together very closely. An impression, which was responsible for the choice of the album title.


With Keith Olsen (FLEETWOOD MAC, WHITESNAKE, FOREIGNER, SCORPIONS) the band had a producer who had already worked in the biz since 25 years. Olsen had visited the band in Germany first and both together chose the 12 best songs from the original 30 demo tracks and committed the arrangements. Afterwords they flew over to Los Angeles where Olsen is running his Goodnight L.A.-Studio.


AXXIS especially see themselves as a live band. At a perfect gig, as Bernhard Weiss once said, the own hands have to glow. "It is the best possibility to play your music", says Weiss, "already alone because of the chance of getting so close to your fans." So, the performances at "Rock am Ring" in front of 30 000 spectators were for sure important highlights of the years 1994 and 1996!


To keep on moving into new directions was a principle which this Hard Rock band from the "Ruhrgebiet" had always followed. If you have a look on ?Kingdom Of The Night? ('89), ?Axxis II? ('91), ?The Big Thrill ?('93), ?Matters Of Survival? ('95) or ?Voodoo Vibes? (97), the latest album by the band, they had always avoided to repeat themselves.


AXXIS do, of course, have their basic sound, their roots are lying within the traditional Heavy Rock of the 70's and 80's, they have found their very own style which is orientated on hooks like "Living In A World". This song is still regarded as a hymn at every show and, as Walter says, the best example for a typical AXXIS song. Bernard's unique vocal style is another characteristic trademark, which makes AXXIS' sound unique. But the cover on these basics is very different anytime. The permanent move can be found within the details.


AXXIS' major ambition is, as Walter adds, "to be a pure Rock 'n' Roll band", and to wash away any doubt, ?Voodoo Vibes? became the most Rockin' album since the very early days. The heavy guitars remind the listener a lot on the intensive ?Punch? of the debut album.


The production this time was done by the band itself for the very first time. After those great lessons in the US by highly skilled producers, AXXIS felt strong enough to handle the complex studio technics alone and to take over the responsibility for it themselves. "The idea for this was invented by our label", says Harry. "We had already produced our demos for a long time before. And as we presented our new demo tapes to our A&R manager, he was not only convinced by the quality of our new material but of the sound of this supposedly rehearsal room recordings as well. He told us to put it on the album as it was. But the songs and especially the vocals weren't completed yet at the time and that was the reason why the idea came up to let us mix it up ourselves. Because of our demos our label gained a lot of confidence in our abilities to produce an album."


Confidence which was confirmed. ?Voodoo Vibes?, produced by Bemhard, Walter and Harry with the help of co-producer and engineer Thomas Kemper at Dierks Studios in the outskirts of Cologne, offers a straight and powerful sound from the beginning to the end which couldn't had been done better by an American star producer. The fact that those complete recordings were finished after only 18 days in the studio is a proof for the band's reliability, who according to Walter, "had a little fear to do the job right in the beginning. The band had to deal with new aspects like being responsible for a recording budget and to be judged for anything that might have gone wrong. But finally everything worked perfectly" and it worked so well that AXXIS would like to repeat it again when starting to record the next album. This self-determination will not be missed in the future anymore...

Kingdom Of The Night II (Bonus)