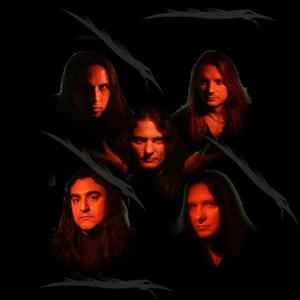 New Eden is a power metal band that is the brainchild of ex-Steel Prophet guitarist Horacio Colmenares, formed in 1993. New Eden's debut, Through The Make Believe, received critical acclaim, with its classic American power metal style. Soon after vocalist Victor Vaca left and was replaced by vocalist James Rivera ex-Helstar. Unfortunately personality clashes within the band arose, with the eventual result being four of the five members (all except Horatio Colmenares) leaving and forming Destiny's End.

Colmenares eventually recruited a second New Eden lineup. After the release of "Obscure Master Plan" on Metal Blade there have been numerous lineup changes, most noteably the addition of ex-Steel Prophet vocalist Rick Mythiasin. "Stagnant Progression" was released by the band at the end of the year in 2003.

Through The Make Believe