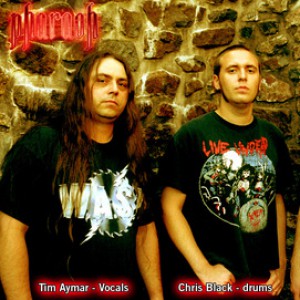 There are two bands named Pharaoh. 1. An American Power Metal band. 2. A German Emocore band. 3. A doom metal/sludge band from New Jersey. 1. Though its earliest echoes ring back to 1997, American heavy metal act PHARAOH released its debut album via the Cruz del Sur Music label in 2003. Paradoxically entitled After the Fire, the album's robust and resilient songwriting caught the ears of selective metal fans worldwide.


1. Though its earliest echoes ring back to 1997, American heavy metal act PHARAOH released its debut album via the Cruz del Sur Music label in 2003. Paradoxically entitled After the Fire, the album's robust and resilient songwriting caught the ears of selective metal fans worldwide. Three years later in 2006, The Longest Night fell and was an immediate underground favorite. As modern and hi-resolution as it was pure and orthodox, The Longest Night also boasted a substantive production that allowed all ten songs to resonate in full splendor.

Once again inspired by the fans' response to their hard work, the songwriters of PHARAOH laid plans to make yet another leap forward, and by the middle of 2007, a third album was ready for production. Returning producer/engineer Matt Crooks and the band set to work without hesitation, starting in July and continuing for the remainder of the year. The band had already agreed on titling the album Be Gone several months before entering the studio, because a singular theme emerged early in the songwriting process. Songs such as the radiant "Speak to Me" and the bottomless epic "Buried at Sea" examine the inherent flaws of mankind, pitted hopelessly against the seemingly omniscient and unwavering power of nature. Similarly, the soaring strains of "Dark New Life" and sinister waves of "Telepath" offer narratives from a world where the human race is blazing paths to literal and emotional extinction. The inevitable disappearance of mankind is the overarching theme embodied in Be Gone's musical storytelling.

Musically, Be Gone features songwriting that is at once complex and compact. Matt Johnsen's now-trademark layering of guitars creates a rich and fertile backdrop for master-vocalist Tim Aymar's powerful and arresting expressions. The rhythm section of bassist Chris Kerns and drummer Chris Black keeps the momentum high, deftly supporting all of the multi-layered melodic invention happening at every turn. Always mindful of not only the genre's traditions but also its own, the band this time invited Riot guitarists Mark Reale and Mike Flyntz to contribute hard-cutting solos to "Dark New Life", and regular guest guitarist Jim Dofka performs a dazzling spot on "No Remains". Because the four bandmates form various songwriting combinations, PHARAOH's albums have a characteristic diversity and depth that few other bands achieve.

PHARAOH's songwriting and studio performances have reached greater heights with each successive album. Grandiose and inviting, Be Gone out-classes its predecessors, and few heavy metal groups have ever sounded as erudite as PHARAOH does, ripened from a decade of intense work together. Like the albums before it, Be Gone is the band's invitation to all free-thinking heavy metal loyalists to join them at the edges of the genre's collective imagination. PHARAOH's steadfast dedication to its album-making craft has delayed its live debut, which will finally come in the form of select shows during 2008. Aiming high as always, PHARAOH will deliver every bit of its majestic energy onstage, performing songs from its entire history. Indeed, 2008 may deliver PHARAOH unto the heavy metal mainstream, thanks to the band's long-awaited live debut and of course the release of Be Gone, a future classic of American heavy metal.

Mid-2010 PHARAOH released a 7" split single along with Canvas Solaris as a Tribute To Coroner, featuring a melodic rendition of Coroner's "Tunnel Of Pain", a new E.P. being slated for early 2011 celebrates 10 years of Pharaoh with several special renditions of cult favorites and various PHARAOH-esque arrangements fans would normally not expect.

A fourth full length CD in the making with an expected mid-2011 release as well.

2. Their style is hard to describe, a strong influence in their music have rapcore, metalcore, emocore, screamo, punk and hardcore.

3. Since 2009, Pharaoh have been playing and touring throughout the East Coast and Southern United States. The Demonstration was released in 2011 on A389 Recordings. This spring, Pharaoh releases This House is Doomed, our 2012 7". They are for you. They are going to be available for digital download when you purchase a copy as well.

The Powers That Be

On Your Knees (EP)