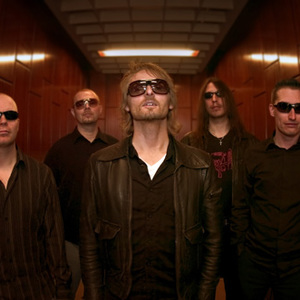 Anubis Gate is a Danish progressive metal band. Stylistically Anubis Gate is conglomeration of the classic 80's heavy metal, a more epic 90's ambience and a dark progressiveness of our days. You could describe it as metal with beautiful soundscapes, cool riffing, and a clear and powerful vocal performance.
Musical inspirations for Anubis Gate are acts such as Queensryche, Iron Maiden, Lord Bane, Tad Morose, Iced Earth, Crimson Glory, Fates Warning, King Crimson, Genesis & Savatage, although it's important to stress that the band really doesn't sound like anyone else.

The name soon changed to Graff Spee and some local gigs were played, mostly original material like "Violent killer", "Death axe" and "Realm of impossibility". Graff Spee got some attention in local papers and in the Danish HM magazine Hot Rockin', first and foremost for being the youngest HM band around (average age was 12). Some demos were made and sent around, but naturally the band was way too young and inexperienced to make records, although this was the main target from the very beginning. In 1986 the band split both as a band and as friends, mainly because Henrik wanted to pursue other musical influences far from heavy.

Jesper and Per stuck together and in 1987 they started up the local heavy metal band Extreme Feedback, which included both Morten S?rensen (vocals - later on he began playing the drums) and Kim Olesen (guitar).

In 1989 Per and Jesper then went onto thrash metal band Invocator, with whom they released a couple of demo's as well as the worldwide well-received album "Excursion Demise", year 1991.

After having been in Invocator till the early nineties, Jesper returned to Aalborg in Northern Denmark, where joined the rap-metal act Geronimo, in which also Morten played. Geronimo released a mini CD in 1995. And the band split up.

Anubis Gate comes to life.
Morten and Jesper kept the contact, and began to write new matrial. In the melodic heavy metal style, with proggy/power metal sound to it. They recorded a demo, and needed extra members for a band.

An appropriate singer was found in Torben Askholm, who had been a part of the Danish metal scene for many years, first with the thrash metal act Prophets Of Doom (released an album in 1989) and then with the progressive metal band Northern Empire (two demos in the early nineties).

When the band had enough material for a full length album, they decided to visit Hansen Studio's in Denmark, under the guidance of producer extra-ordinaire Jacob Hansen (actually ex-band mate of Jesper's from the Invocator days), who among others have produced such well respected bands as Ill disposed, Ancient, Falconer, Mercenary, Wuthering Heights and Manticora.

The production is clean and upfront, and all instruments are nicely separated in the mix. It is a real heavy metal production, fitting for a release like this. On the debut album, "Purification", Kim Olesen guests on guitars and keyboards, while Henrik Fevre is responsible for the harmony vocals. The production took place in the summer of 2003, and the last parts (harmony vocals, extra guitars, better mix ?) were added in December '03.

Lyrically, "Purification", is a loosely based concept album about fighting inner demons, and cleansing on a psychological level. This goes very well together with the band name, as Anubis was the jackal-God in the ancient Egyptian mythology that lead the misguided dead souls through the Underworld and into the kingdom of Osiris.

In the fall of 2003 Anubis Gate hooked up with Danish based Intromental Management for the promotion of their album, and by early November a deal was signed with the Spanish/German label Locomotive Music for the European and North American release of "Purification", which happened in late spring 2004.

After an incredible interest from the media and fantastic fan response, Anubis Gate began writing material for the follow-up to "Purification", incorporating both Kim (guitars) and Henrik (bass/backing vocals) as permanent members of the band.

The new material is more varied, in tempo and overall. It is a natural step, still Anubis Gate, but more interesting for the listener, and shows more skills.

Once again Anubis Gate chose Jacob Hansen as the producer for the album. The studio got booked for the winter of 2004/2005, and this time for a longer period, giving the new songs what they really deserve.

"A Perfect Forever" - the 2nd album, was released on September 19th 2005, once again with a grandiose production from Jacob Hansen. With an even more mature and ultimate melodic songwriting, an album set to light a massive fire in the hearts of all metal fans.

In the fall of 2005 Torben suffered from a temporary loss of his voice, which forced him to drop out of the planned gigs, at which Henrik took over vocal duties, while playing the bass as well.

Around the end of 2005 a choice was made to find a new vocalist, a job that proved quite easy considering that producer and longtime friend Jacob Hansen volonteered right away to make the band a demo with him singing on it. Shortly after Jacob was confirmed as the new singer of Anubis Gate.