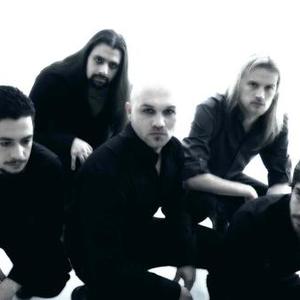 Formed back in 2000, PATHOSRAY is one of the best kept secrets of the Italian metal scene. Originally going by the name N.D.E, the band, formed by drummer Ivan Moni Bidin, guitarist Luca Luison and vocalist Marco Sandron, established their own sound as a mixture of heavy metal, progressive metal and 70's style symphonic prog-rock. In 2001 the band recorded its first demo, "Strange Kind Of Energies" - released in 2002 under the new band name PATHOSRAY, which they promoted heavily through lots of concerts in their home country over the next few years.

In 2001 the band recorded its first demo, "Strange Kind Of Energies" - released in 2002 under the new band name PATHOSRAY, which they promoted heavily through lots of concerts in their home country over the next few years.

By 2006 the band had established their line-up with bass player Fabio D'Amore and keyboardist Gianpaolo Rinaldi, and it was time for another demo - this time the very impressive "Deathless Crescendo", which was well-received by the Italian media and of course gained the band more concerts around Italy.

In the fall of 2006 they started to record their first full-length album, simply titled "Pathosray". The album was recorded at Angel's Wings studio by Nico Odorico and Mattia Sartori.

Once the album was completed, the band (now with new guitarist Alessio Velliscig) sent the disc to Danish based Intromental Management (by recommendation by their good friends in the band Raintime, who are also signed to Intromental), and once the awesome music on the album reached Denmark, a deal was soon in place.

Through Intromental Management a record deal was immediately made with American record label Sensory Records (home of such great acts as Spiral Architect, Circus Maximus, Zero Hour and Wuthering Heights), who absolutely loved what they heard.

The "Pathosray" debut salbum is a clever mixture of symphonic arrangements, technical parts and huge melodies. Musically it's easiest (but not completely fair towards PATHOSRAY) to compare with acts such as Dream Theater, Nevermore, Symphony X, Eldritch or Fates Warning.

The decision was made to have the album mixed at Jailhouse Studios in Denmark with world-reknowned producer Tommy Hansen (a.o. Jorn, TNT, Beyond Twilight, Helloween, Pretty Maids). The mixing was done in July 2007. This of course lifted the sound a hundred percent. The great artwork was created by none other than Mattias Nor?n at ProgArt Media (a.o. Evergrey, Ayreon, Kamelot, Into Eternity).

The album was in USA on October 23rd 2007, Canada and Europe on October 26th and followed a few months later in Japan (through Marquee/Avalon).

In support of the release, PATHOSRAY played a few select shows around Italy and in September 2008 they went to USA to perform for the first time in front of an enthusiastic ProgPower Festival crowd. 2 weeks later they played at ProgPower Europe in Holland with just as good a response.

The rest of 2008 was spent on writing and recording the new album, "Sunless Skies", which was recorded and engineered by Ivan Moni Bidin and Fabio D'Amore at Artesonika Studios in Italy, and mixed and mastered in Sweden by Johan Ornborg and Jens Bogren at Fascination Street Studios (Symphony X, Hammerfall, Opeth, Katatonia and more). This time the artwork was created by Genzo (a.o. Fairyland).

With new record deals in place - Frontiers Records worldwide and Soundholic Records for Japan - and an awesome new album to boot, PATHOSRAY is ready to climb the next step on the progressive metal ladder. In connection with the upcoming release, set for April 24 in Japan, May 25 in Europe and June 9 in USA, PATHOSRAY has been confirmed to play ProgPower Scandinavia Festival (alongside Pretty Maids, Freak Kitchen, Mercenary and more) in Copenhagen, Denmark on September 25th 2009.

Due to artistic differences, guitarist Alessio Velliscig and Pathosray have decided to part ways and Antonio Petris joined the band in summer 2010. Antonio has been working with Pathosray's basisst, Fabio D'Amore, for a few years now on several projects. The band found he brought a level of energy and artistic contribution.

Pathosray is now working on the new (and third) album.