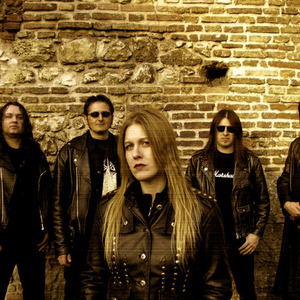 White Skull takes life at the end of the Eighties. In 1991, after the recording of its first demo-tape, White Skull was noticed by the audience and the specialized Italian metal press. The band started a live-promotion in order to increase its own experience. In May 1994, WS released their second demo entitled "Save the Planet", which received excellent reviews. Excellent reviews and extensive live appearances brought the band in touch with a few Italian labels. However, their music was considered "not suitable for the market"? thus, the guys were asked to change sound and music style.

Being fond of classical Heavy Metal and followers of bands like Iron Maiden, Helloween, Scorpions, Black Sabbath and Saxon, the Skulls decided to go on with their type of music, because of their belief in true Metal life-style. White Skull then contributed to two Heavy Metal compilation:

May 1997: Guitar player Max Faccio leaves the band, replaced by BB Nick Savio in November 1997. (two other guitarists temporarily played for the band: Pino Sicari from May to August, Lele Pretto from September to November)

March 1999: Released EP "Asgard", containing the famous song, plus an unpublished song "Hagen The Cruel" and two covers: "Tears by the Firelight" (from german Stormwitch) and "Adralmelch" (from Adramelch, Italian cult band of late 80s)

February 2001: Federica "Sister" De Boni leaves the band due to personal problems. One month later the band decides to get a male singer: Gustavo "Gus" Gabarr? from Argentina. He soon records with the band and appears for the first time in a live performance with White Skull on the 7th April 2001, in Germany.

December 2002: Guitarist BB Nick leaves the band because of his growing interest in his side-projects; he is soon replaced by Danilo Bar.

After album release the band had to cancel a lot of shows due to health problems of the vocalist. During this stop the band wrote a lot of new songs and they came back into the studio at the end of 2005 in order to record an album entitled ?The Ring of the Ancients? based on the Celtic's stories.

Recorded at Remaster Studio Vicenza, this Cd arose the interest of DragonHeart Records which signed the band to a multi-album deal.

The brand new album ?The Ring of the Ancients? is heavier than ever, White Skull music goes straight to the heart and soul of the MetalBangers! I

In the January 2007 the vocalist Gus Gabarr? left the band due to work problems and White Skull announced they are back to a female singer, the real peculiarity of the band.

The cd is was released in March 2009 and since then the band started the "Metal Axes Tour" to promote it, with various concerts around Italy.

On May 1st, 2010 the band announced that keyboardist Alex Lucatti was forced to leave the group due to "work problems"

Will Of The Strong

The Ring Of The Ancients

Tales From The North