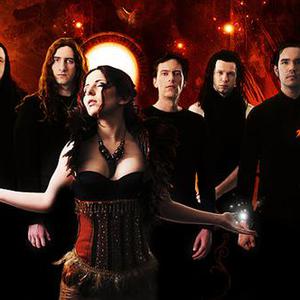 Stream of Passion is a progressive metal band with symphonic metal influence founded by Arjen Anthony Lucassen and Marcela Bovio in 2005 in The Netherlands. The band currently consists of vocalist, lyricist, and violinist Marcela Bovio, bassist Johan van Stratum, keyboardist Jeffrey Revet, guitarist Eric Hazebroek, guitarist Stephan Schultz, and drummer Martijn Peters. It all started with Ayreon's frontman Arjen Anthony Lucassen being impressed by a recording he received from Marcela Bovio, the lead singer of Elfon&iacute;a.

It all started with Ayreon's frontman Arjen Anthony Lucassen being impressed by a recording he received from Marcela Bovio, the lead singer of Elfon&iacute;a. She had joined a contest for guest artists on the new Ayreon album. She won this competition and can be heard on Ayreon's The Human Equation singing the part "Wife". Arjen wanted to create more music with Marcela after the Ayreon album was finished, so he created a new band.

Arjen also selected Lori Linstruth, Johan van Stratum, Davy Mickers, and Alejandro Mill&aacute;n, and started Stream of Passion. Their first release was Embrace The Storm. Because the members lived thousand of miles apart (The Netherlands, Sweden, and Mexico), the album was mostly written over the internet.

For the following tour Marcela brought her sister Diana Bovio as background singer. Diana also appeared on the single Out In The Real World and the live CD/DVD Live In the Real World.

On 4 March 2007, Arjen said in an interview on his website that he was going to quit the band: Because I will be fully concentrating on the new Ayreon for at least the next year, I have no more time for SoP, so I quit the band. It would be unfair to have them wait until I'm ready, especially now things are going so well for SoP. Arjen also stated that SoP would continue without him.

A few days later, a message on the Stream of Passion website said that Lori and Alejandro also had decided to leave the band and focus on their own personal lives and musical projects. The message on the website stated that this is not the end of the band, and the remaining members are already busy writing music for a new album.

Jeffrey Revet, Eric Hazebroek, and Stephan Schultz were later announced as new members of the band, to complete a new line-up.

A War Of Our Own

Live In The Real World CD2

Live In The Real World CD1

Out In The Real World