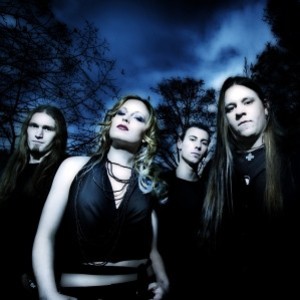 A first demo, "Morning In Atlantis", was released in 2000. In 2001 they signed with TTS Media Music/Black Arrow Productions, and in 2002 their first album, "Eternal Endless Infinity", was released. 2003 saw a change in line-up, replacing Christian Stani with Mario Plank and Chris Kamper with Miro Holly. Now with Napalm Records, Visions of Atlantis released their second album, "Cast Away", in 2004. Since then a few more band members have left and joined. In 2005 Nicole Bogner was replaced by Melissa Ferlaak (formerly with Aesma Daeva) and Wolfgang Koch replaced Werner Fiedler. In 2006 Martin Harb, who already played with Visions of Atlantis on their tour in Mexico in 2003, replaced Miro Holly.

In May 2007, their third album, "Trinity", was released. In September 2007, they began their first North American tour with Epica.

On the 28th of November 2007 a message was posted on the official Visions of Atlantis website saying that Melissa Ferlaak and Wolfgang Koch have left the band, both citing personal reasons. Following this Visions of Atlantis have announced their ex-guitarist Werner Fiedler has rejoined the band.

On the 1st of February 2009 a message was posted on the official Visions of Atlantis website to present a new lead vocalist of the band, in the person of 20 years old Austrian singer Joanna Nieniewska.

However Joanna was replaced on June of the same year,by the greek singer Maxi Nil (x-Elysion) and now the band is in the studio, preparing their new album which will come out in the first months of 2011.

A Symphonic Journey To Remember (Live)

The Deep & The Dark