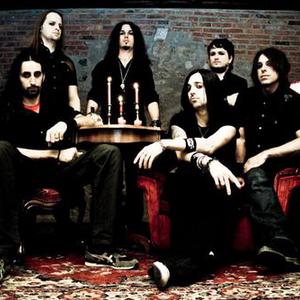 Elvenking is a folk metal band formed in Sacile, Italy in October 1997 by guitarists Aydan and Jarpen. In March 1998, singer Damnagoras joined the band, but it wasn't until the following September that the group found a definite stability with the arrival of Zender on the drums. Right from the beginning, Elvenking set themselves the objective of finding a formula which can combine power metal, folk music and extreme sounds in a unique mixture. The one and only demo To Oak Woods Bestowed that was recorded in 2000 led the band to sign directly a contract with German leading label AFM-Records.

Right from the beginning, Elvenking set themselves the objective of finding a formula which can combine power metal, folk music and extreme sounds in a unique mixture. The one and only demo To Oak Woods Bestowed that was recorded in 2000 led the band to sign directly a contract with German leading label AFM-Records.

Meanwhile, Elvenking enriched their sound with the entry of new bass player Gorlan. He first appeared in the band as a session player, but soon he joined Elvenking permanently as a member at all events.

The first official album Heathenreel was released on July 23rd 2001 and received flattering reviews all over the metal world, becoming ?album of the month? in many magazines and webzines.

Due to various reasons, singer Damnagoras was forced to leave the band in August 2002. With the new singer Kleid and the addition of the violin/keyboard player Elyghen, Elvenking records Wyrd, which was officially released on April 19th 2004.

A difficult period that followed the release of the second album led to a drastic line-up change that saw the return of the former vocalist Damnagoras and the split with Kleid and guitarist Jarpen.

On the live activity side, the band has always carried on hitting the stages around Europe, also playing at festivals such as Sziget (Hungary), Bloodstock (UK), Agglutination (Italy), Tradate Iron Fest (Italy), D:O:A (Germany) and several other venues.

Strengthened by the renewed spirit within the five piece line-up, Elvenking set themselves the goal to create the best and strongest material they'd ever written.

The new album The Winter Wake was released on January 2006 and showed once again the main features that made Elvenking a unique band in the current metal scene: fresh and original sound that mixes enchanting melodies, heavy metal groove, catchy choruses and acoustic elements.

After the cheerfully folky third album the band decided to write their first concept album. They choose a darker tone revolving around death, stating they would incorporate some of their heavier influences with the theme. On September 14th 2007 Elvenking's fourth album The Scythe was released. While the media gave it generally favourable reviews, a large portion of the fan base criticized the new direction for not including as many folk elements as the previous albums.

Possibly due in part to this negative fan feedback, the band announced two more albums. The first would be an acoustical album, something the band had been wanting to do. They didn't want to advertise it as a new full-length Elvenking album rather than an intermission with many older songs re-recorded as well as new material mixed in. They stated the second one would be a "normal electric album".

Two Tragedy Poets (...And a Caravan of Weird Figures) was released on November 14th, 2008. The album was instantly recognized by fans to be true to the spirit of the band's earlier years. Soon after, the band announced that their session guitarist Rafahel had been chosen to be a full-time band member.

Reader Of The Runes - Divination

Secrets of the Magick Grimoire

The Night Of Nights: Live CD2

The Night Of Nights: Live CD1

Two Tragedy Poets … and a Caravan of Weird Figures

From Blood To Stone (CDS)