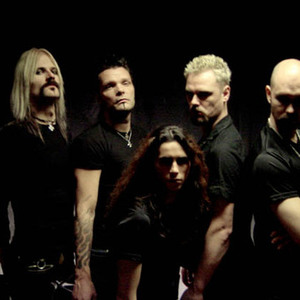 Dream Evil is a heavy-power metal band from Sweden, assembled and integrated by renowned musical producer Fredrik Nordstr?m in 1999. Fredrik had the ambition of creating a band of his own for a long time, but was yet to find somebody with musical ideals similar to his. However, while on holiday on the Greek islands during the year of 1999, he met guitarist Gus G (from Firewind and Mystic Prophecy). The two musicians got along quite well, despite their age difference of over a decade.

Fredrik had the ambition of creating a band of his own for a long time, but was yet to find somebody with musical ideals similar to his. However, while on holiday on the Greek islands during the year of 1999, he met guitarist Gus G (from Firewind and Mystic Prophecy). The two musicians got along quite well, despite their age difference of over a decade. Plans for Dream Evil commenced, and shortly, Gus boarded a plane to Gothenburg, on which he and Fredrik began writing material for the band.

In order for Dream Evil to become the band that they were idealizing, it would need to have musicians of exceptional talent. The person who first came to their minds was Snowy Shaw (from King Diamond, Mercyful Fate and Notre Dame), but the drummer initially refused their invitation. Later on he changed his mind and agreed to play on the band's debut album.

Vocalist Niklas Isfeldt had done backing vocals for some of HammerFall's songs produced by Fredrik, and since Isfeldt was not involved in any major project at the time, it was decided that he was a good choice for Dream Evil. Niklas had shown a lot of promise in his test, and it was soon decided that he would become a definitive part of the band. He also brought along his friend Peter St?lfors, who assumed the bass.

The fact remains that, up until the moment the promotional photos were shot, the whole of the band had not been in the same place at the same time even once. Some members did not even know each other.

The band soon got a deal with Century Media Records, and intended to name themselves Dragonslayer due to the themes of the songs which had been written by Gus and Fredrik, which had a strong focus on medieval and fantastical themes. However, their label did not find the name original enough, and thus the band settled with the name Dream Evil, inspired by the title of Dio's album Dream Evil.

Dream Evil's debut album was released on April of 2002 and received positive feedback from the specialized press. At one point, the album ? entitled Dragonslayer ? reached number one on the Japanese import charts. The band proceeded to play a series of festivals and also supported Blind Guardian during part of their world tour.

The members of Dream Evil got along well despite the seemingly random manner by which they had been brought together. Snowy Shaw then joined the band permanently and Dream Evil went on their first Japanese tour. During their stay in Japan the band was invited by HammerFall to support their 2003 European tour. Their label manager hinted that it would be a good idea to have a new album out by then.

With little time on their hands, the band wrote the basis of most songs on the flight to Europe and on the day of their arrival entered the studio in order to record a new album. They took two weeks in total to record Evilised and most songs were recorded as they were written. It was released on the 20th of January, and one week later Dream Evil proceeded to tour Europe with HammerFall and the less known Masterplan.

In June of the same year the band returned for a second Japanese tour and Gus G was featured on the cover of Young Guitar Magazine, a magazine well respected by musicians from around the globe. During the promotional tour of their next single, Gus was already committed to playing with Mystic Prophecy. Thus, Snowy Shawn took upon his hands the task of playing the lead guitar sections of the Dream Evil songs.

For their third album the band actually took time to write the songs and fine-tune them in the studio. The Book of Heavy Metal took two months to be recorded and was released in May of 2004.

Guitarist Gus G left the band in late 2004 in order to dedicate more time to Firewind, being replaced by Markus Black (also known as Mark U Black).

Niklas Isfeldt and Peter St?lfors briefly left in 2005 to be replaced by Jake E. Berg (aka Jake Steel, of Dreamland) and Tommy Larsson, but returned before recordings or live shows were done. At the start of 2006, Snowy Shaw abruptly quit Dream Evil.

After a half year of silence, Dream Evil published a statement on their homepage and announced that they had a new drummer, whose name was Pat Power (aka Patrik Jerksten) and that they had recorded 18 new songs. The 18 said songs where released on the album United on October 13, 2006.

On August 13, 2007, the band posted news on their official website concerning an upcoming release, titled Gold Medal in Metal, which would contain some tracks previously released only in Japan as bonus tracks and some new recordings, as well as a DVD containing a live performance from November 25, 2006 in Gothenburg, Sweden. It is tentatively set to be released in November or December of 2007.

The Book of Heavy Metal