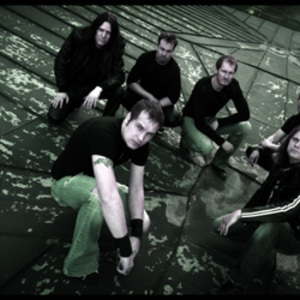 October 21, 2011: Heavy Metal and classic rock strikes back. "Jerusalem", Astral Doors sixth album is more than just an album: -It's a concept; power packed riff oriented music with razor sharp vocals and lyrics in your face. But hey; perhaps you want to know more about Astral Doors?! Don't worry; below you can read the full biography In early 2002, Swedish guitarist Joachim Nordlund, drummer Johan Lindstedt and singer Nils Patrik Johansson teamed up and decided to write some metal songs in the spirit of the old heroes Rainbow, Dio, Black Sabbath and Deep Purple.

But hey; perhaps you want to know more about Astral Doors?! Don't worry; below you can read the full biography

In early 2002, Swedish guitarist Joachim Nordlund, drummer Johan Lindstedt and singer Nils Patrik Johansson teamed up and decided to write some metal songs in the spirit of the old heroes Rainbow, Dio, Black Sabbath and Deep Purple. They completed the band with organ player Jocke Roberg and with Martin Haglund on the bass.


They recorded their debut-album (mixed by Peter T?gtgren at Abyss Studio) and began working with Danish based metal-agency Intromental Management. Deals were locked down for ?Of The Son And The Father?. The band caught immense media attention, with fantastic reviews everywhere, and various festivals were not late to book ASTRAL DOORS.(now with Martin Haglund as the second guitarist and with Mika Itaranta on the bass) The band performed at Wacken Open Air, Sweden Rock Festival and 2000 Decibel during the summer of 2004, gaining an impressive number of new fans.

Not resting on the laurels of their success, ASTRAL DOORS finalized their 2nd opus ?Evil Is Forever? very quickly and the album was released by the same labels as the debut album. The release, which once again received amazing media and fan support, was followed by an extensive European tour as support act to German metal-gods Grave Digger, as well as several festival gigs in Sweden, and not to forget a successful gig in Germany with the hard rock princess herself, Doro Pesch.

Wanting to please their European fans with some extra and exclusive material, while waiting for their next full length, the band gathered a variety of material of unreleased songs and Japanese bonus track, and in October 2005 released the ?Raiders Of The Ark? EP.

In late 2005 the band once again went back to the Abyss Studio and Peter T?gtgren to record their 3rd full length album, ?Astralism?. The album was released in 2006 and stunned everybody with its roaring sound and incredible riffs and technicality. Astral Doors was offered the prestigious spot as official support band for the power metal kings Blind Guardian on a full scale European tour in the fall of 2006. Astral Doors accepted the offer, impressed everybody and left deep musical tracks in their wake?

When the band returned to Sweden after the very successful, 2 month long tour with Blind Guardian, Astral Doors immediately started writing new material for the fourth album. Astral Doors will always stand with both feet in the classic hardrock, but this time around they decided to bring more elements, moods and variations to the classic Astral Sound. "New Revelation" was released September 2007, received great reviews and climbed on the charts.

After the release of New Revelation, the band went out on their first big European tour as headliners. It was a blast and during 2008 the band returned to Sweden Rock Festival for a smoking appearance.

By this point, the band felt that they needed new challenges; left the old management and signed with German agency Flying Dolphin and later also with new label Metalville.

Two and a half year after the release of "New Revelation", the band striked back, stronger than ever before with the epic masterpiece, "Requiem of Time".
With songs like "Power and the Glory", "Testament of Rock", "St. Peters Cross", the album truly is one of the highlights in the bands career.
The first line up change in the history of the band was also a fact as Ulf Lagerstr?m was introduced as the new bassplayer in the band stepping in after Mika. Martin Haglund also left the band due to personal issues. No new guitarist was hired; the band decided to finally give Joachim the attention he deserves and also to give the magical keyboard of Jocke Roberg more space in the sound picture.

Stronger than ever, the band went out to play some of the most important festivals 2010, and the band also decided to put together a compilation with their best songs as a treat for old fans, but most important; to win over new fans. "Testament of Rock-The Best of Astral Doors" also contains the previously unreleased song, "Victory".

This summer, 2011, the band played some cool festivals, among them the mighty BANG YOUR HEAD FESTIVAL.

In October 2011 the band will release their heaviest album so far, "Jerusalem", which is a journey through good and evil. Mixed by Daniel Bergstrand, the music of Astral Doors reaches new heights. Blistering hits like "Seventh Crusade", Babylon Rise" and "With a Strangers Eye" meets up with the epic title track and the video hit "Child of Rock'n'roll". Several tours are also planned. The best band in the world has sharpened their strings......

Notes From The Shadows

Of The Son And The Father