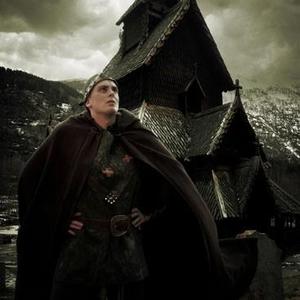 Glittertind was founded in 2001 by Torbj?rn Sandvik (b. 1985). Inspired by old Norwegian history and culture he made a sound blending folk, metal and punk which Tommy Udo (Metal Hammer) proclaims is: ?..A bizarre combination of folksy mellowness, hardcore punk riffing, Nordic power/thrash metal and winsome sea-shanty melodies straight out of Captain Pugwash..? The name Glittertind, or "Glittering tine" in English, gives associations of vast and majestetic landscapes. The name is taken from a wellknown mountain situated in the heart of Norway ? Jotunheimen.

The name Glittertind, or "Glittering tine" in English, gives associations of vast and majestetic landscapes. The name is taken from a wellknown mountain situated in the heart of Norway ? Jotunheimen. Many famous Norwegian artists and writers have got uncountable strong impressions from these enormous mountains and these same giants have a strong influence on the lyrical and musical concepts of Glittertind.

After several years trading underground demos Glittertind got signed on Karmageddon Media. This colloboration resulted in two releases. The debut-album ?Evige Asatro? or in English, "Eternal Faith in Norse religion", was released August 2004. Several magazines cheered this album and Nick Ruskell (Kerrang!) summerized it with the following words:

?..One listen to one-man Norwegian project Glittertind will instantly make you want to eat meat off the bone, casually get into a drunken fight and possibly grow a huge beard as well, thanks to their raucous Pogues-turned-up-to-11 sound. Madder than a donkey on a trampoline and twice as ludicrous, this is also an incredible amount of fun!..?

The second release got out April 2005 as an MCD celebrating Norway's 100 years of independence. It was dedicated to Norwegian freedomfighters throughout the ages and it made a statement for common spirit against the extreme egoism and self-centeredness we see nowadays. The title "Til Dovre Faller", "Until Dovre falls", was taken from the moment of the constitutional signing in 1814 where the patriots gathered there stated, that they would struggle for independence until the mountains of Dovre fell. Avi Pitchon (Terrorizer) wrote the following about this release:

"..Glittertind understands that folk is first and foremost life affirming as opposed to hateful, morbid, anti-social, suicidal and racist. It is also simple and realistic - just like punk. How refreshing it is to witness a patriot who is strong and healthy-spirited enough to oppose the EU entity, yet wish for a 'united and peaceful Europe'. How ideologically consistent the inclusion of songs against Nazi occupation side by side with songs resisting older foreign conquests of Norway.."

In 2008 Glittertind signed a long term agreement with Napalm Records and Geirmund Simonsen (b. 1983) joined the ranks of this project.

With "Landkjenning", in English "Landfall", Glittertind commemorates the history and poetry of the Norwegian homeland. Traditional melodies and Nordic sounds determine the overall picture of an album that nevertheless finds repeated diversity in its placement of drums and fast riffs. The folkloric sounds delivered by authentic instruments of old skillfully merge with modern elements to create catchy, detail-oriented works. The clean and powerful vocals, sung in Norwegian, give "Landkjenning" a unique touch. The very profound lyrical concept revolves around Norway's Christianization and transports the listener 1000 years back into the past, to a time where one had to decide between the new religion and the traditional old ways. Kris Verwimp's (Arkona, Crimfall, Moonsorrow) artistic know-how has impressively captured this lyrical theme graphically. Glittertind's latest album is an authentic and primal piece of music that will undoubtedly capture the hearts of Folk Metal fans worldwide!