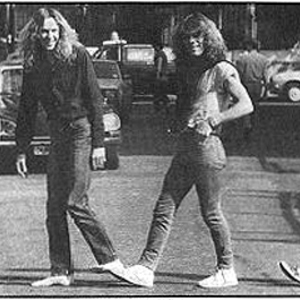 Diamond Head are a British heavy metal band formed in 1976 in Stourbridge, England. They were one of the leading members of the New Wave of British Heavy Metal (NWOBHM) and are acknowledged by later bands like Metallica and Megadeth as an important early influence. Formed by school friends Tatler and Harris, the band recorded and released self-financed demo tapes in 1977 and 1979 and with their unique sound and quality of song writing gained enough attention to tour as support with AC/DC and Iron Maiden.

Formed by school friends Tatler and Harris, the band recorded and released self-financed demo tapes in 1977 and 1979 and with their unique sound and quality of song writing gained enough attention to tour as support with AC/DC and Iron Maiden. A clutch of record companies fought to sign the band, while their first album, variously known as " The White Album" or Lightning to the Nations, was released by the band via mail-order only in 1980 by their own Happy Face Records. Each plain label LP featured the signature of one or other of the band members and has become on of the most sought after collector items from the time. Its success finally led to a record deal with MCA Records in 1981. The first major label LP Borrowed Time was enthusiastically received ( getting to #24 in the UK album charts), although the more experimental follow-up Canterbury, in 1983 suffered pressing problems and criticism over the progressive direction. Stalling creatively, the band split up for the first time in 1985.

In 1991 Tatler and Harris reformed Diamond Head. The same year Sean Harris (the vocalist) worked on a song with Dave Mustaine for Megadeth called "Crown Of Worms" - it was unreleased but would feature on the remastered version of Countdown to Extinction. In 1993, featuring contributions by Tony Iommi of Black Sabbath and Dave Mustaine of Megadeth the band released Death and Progress. In 1994 the band split again and did not reform until 2002. During which time they did a tour with Megadeth, who'd also re-formed after Mustaine had recovered enough to be able to play guitar again. After news of work on a new album, fans were surprised to hear of the departure of Sean Harris in 2004 and his replacement by Nick Tart. Brian Tatler is now the only ever-present member in the Diamond Head line-up. The band's latest album, All Will Be Revealed, was released in 2005, but was very different from their early material.

Diamond Head are probably most famous among heavy metal fans for their influence on Metallica. Metallica acknowledge them as a very important early influence and have often covered Diamond Head songs at gigs. Harris was even asked to join Metallica in the 1980's but turned the band down. The song Helpless was rumored to be a song Lars Ulrich forced the band to struggle through as an unrehearsed encore in the early days of their formation. Sucking My Love, Am I Evil and The Prince were also common live covers at that time. The earliest known actual recording of these songs exists as a rehearsal demo recorded at then-bassist Ron McGovney's house in March of 1982. The Metal Up Your Ass live demo, recorded in November of that year, featured a live rendition of Am I Evil. The Prince was also played, but the tape ran out too soon to catch it. The song would see another demo release as part of the Horsemen Of The Apocalypse demo in 1983. Sucking My Love exists on various bootlegs that have been circulating since 1982 along with a recording on the early demo 'No Life Til Leather'.

The first official release of Am I Evil came in 1983 as part of the Creeping Death EP, paired with another NWOBHM classic Blitzkrieg, by the band of the same name. The two songs were also included in the first pressing of the Kill 'Em All LP when it was re-released by Elektra Records.

Helpless would see a proper release with Garage Days Re-Revisited in 1987, and The Prince was included as a B-side to the Harvester Of Sorrow single.

The official recordings of Helpless, Am I Evil, and The Prince would also be featured on Metallica's 2-CD Garage Inc. compilation, a collection of numerous other cover songs that the band had played over the years. The first CD in the set was newly recorded covers, one of which was Diamond Head's It's Electric.

Compilations or alternative versions
Am I Evil (1987)
Sweet and Innocent (1988)
Behold the Beginning (1986)
Singles (1992)
Helpless
Sweet and innocent
Streets of gold
The prince
Sucking my love
Waited too long
Play it loud
It's electric
Trick or treat
Dead reckoning
Shoot out the lights
In the heat of the night
Makin' music (long version)
Play it loud (live)
Sucking my love (live)
To Heaven from Hell (1997)
Lightning to the Nations (1997)
The Best of Diamond Head (1999)
Diamond Nights (2000)
The Diamond Head Anthology: Am I Evil? (2004)

Lightning To The Nations 2020

Whats In Your Head

What's In Your Head?

All Will Be Revealed